Last year Rogers was the first of the Big 3 wireless carriers in Canada to release a transparency report and this year, they have released data again related to law enforcement requests for 2014.

A key Supreme Court ruling in 2014 made Rogers tighten their disclosure policy to require a court order or warrant (except in emergencies) for all data requests. For 2014, the company saw 113,655 requests, a decline of 35% compared to 2013, which saw 174,917 requests.

The majority of requests came with a court order/warrant, followed by emergency requests from police. For Customer name and address checks, along with child sexual exploitation assistant requests, Rogers stopped providing information on these checks in 2014 unless a court order or warrant was provided, or in emergences, after considering the landmark privacy Supreme Court ruling R. v. Spencer.

Take a look at the screenshot of the report below which breaks down their 2014 requests: 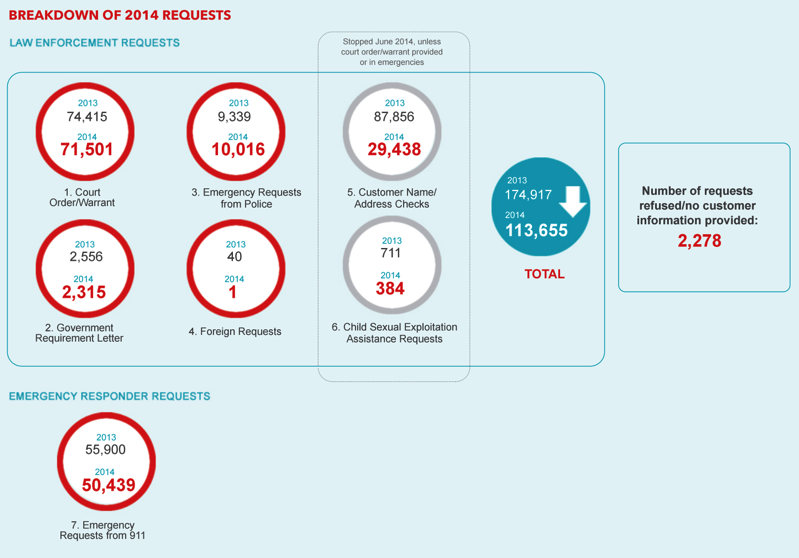 Ken Engelhart, Chief Privacy Officer of Rogers, said “listening to our customers and improving their experience is important to us and a key part our Rogers 3.0 plan.”

Last year, TELUS and SaskTel similarly released transparency reports. Bell has remained silent on their transparency data as of last year and has not provided a report, to our knowledge (we’ve reached out to the company for comment and clarification).

Bell protects customer privacy by complying with all federal privacy laws, CRTC regulations and our own strict privacy policy in dealing with information requests from government and law enforcement. Given the importance of this issue, we seek clear guidance from government on how much and what type of information we may disclose about such requests.