SaskTel has released its transparency report to disclose the number of requests for information it received from government and police agencies in 2013, with the total number pegged at 11,857, based on seven different types of requests seen below: 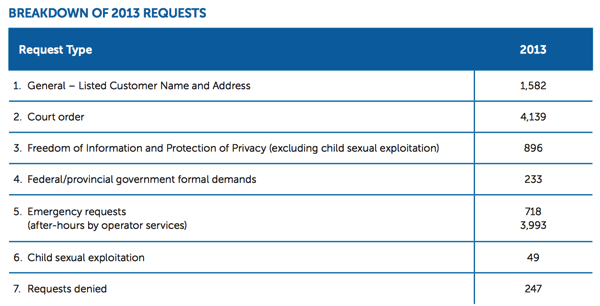 The majority of requests were court orders, while a bulk of requests were emergency requests categorized as after hours by operator services. Here’s what the provincial carrier says it handles requests:

All requests that SaskTel responds to require, as a pre-requisite, a legal basis for making such a request. For example, many of the requests we receive are to respond to court orders from law enforcement agencies. In addition, we receive requests from government departments who are authorized by statute to request information to enforce laws like the Income Tax Act. We also assist police services in emergency life threatening situations or where there is an ongoing investigation concerning child exploitation.

The majority of requests we receive are to confirm a customer’s current name and address, information commonly found in telephone books.

We do deny requests for customer information. Except for court orders, SaskTel will refuse to provide the information if we believe the request is vague or not supported by statute. Even court orders undergo a review.

You can check out the full transparency report here. Earlier this year Rogers released their own report, while Telus also did the same last month.