The change may be due to the fact Shaw’s Freedom Mobile pulled a #micdrop on Public Mobile this morning, by releasing a $40 plan with 10GB of data, targeting Telus, Koodo and Public Mobile customers. Is this considered a mini wireless war now?

Existing customers on Public Mobile’s community forums were left confused and angry due to the quick removal of this promo plan, since they ordered SIM cards online which have not even arrived yet.

Below are a couple responses noted in the forum thread:

How is this no longer available??? I ordered a SIM card yesterday only because of this promotion. Wtf is going on?

This is truly ridiculous

At first, some thought it was a mistake by Public Mobile to remove the promo, but shortly afterwards the original post by moderator Jeremy_M was updated to say “This promotion is no longer available,” in bold red text: 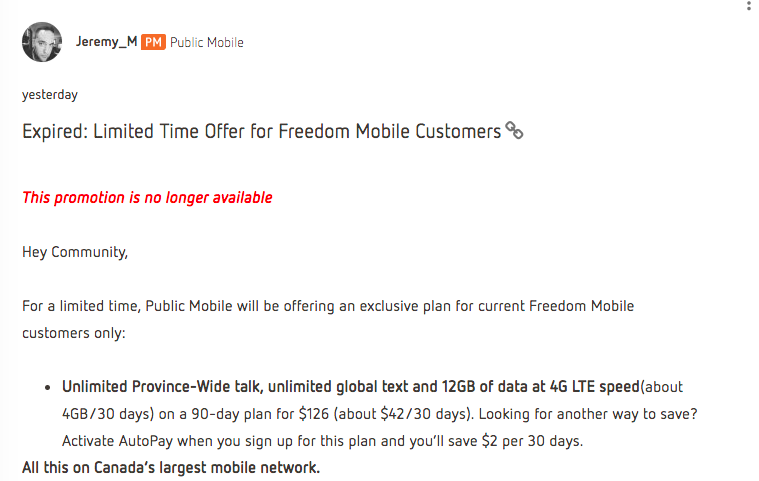 It looks like Shaw may have had enough of Telus trying to lure customers over via targeted promo plans, and decided to flip the script with an excellent Freedom Mobile promo of their own.

Anyone try switching to Public Mobile’s promo plan, only to get stuck in limbo?