Telus-owned Public Mobile is disrupting the Canadian cellphone plan landscape at the moment with their promo $38/4GB plan (after credit card auto renew) and unlimited province-wide talk. The plan caused Virgin Mobile to match the plan, which then caused Fido to match as well for those in BC and Alberta.

Public Mobile’s promo expires on Sunday, November 20, 2016. Online SIM card sales stopped earlier this week as they would not deliver in time and just the other day the promo was no longer advertised on the Public Mobile website (it is still available though, when you enter in your SIM card number on the activation page).

The company announced yesterday it would launch on the ground SIM card sales and pick up in Vancouver, Montreal and Toronto, starting today and lasting until tomorrow only, for last minute switchers (and those who have not received cards).

It turns out Canadians really want to jump on Public Mobile, as one user on Reddit shared an image of the initial line up in Toronto on 25 York, full of eager switchers: 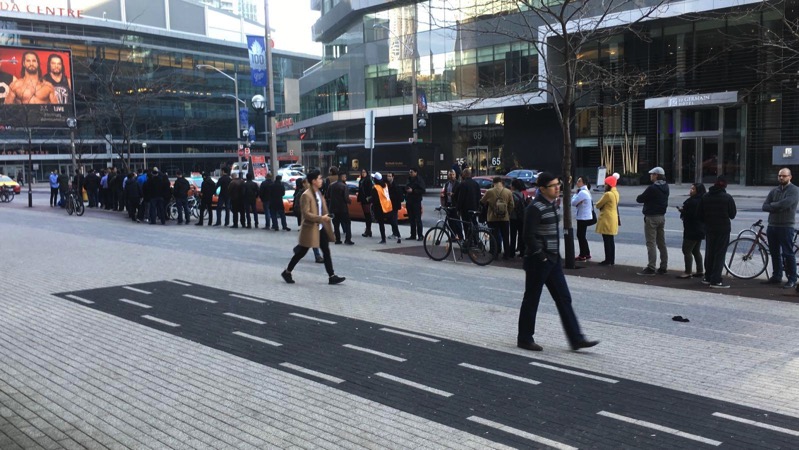 SIM card sales are supposed to go from 11am to 7pm local time, but Public Mobile announced cards sold out in Vancouver by early afternoon. The initial line up in Vancouver was as long as 75 people deep according to iPhone in Canada reader @khairais, right at the 11am start (Public Mobile ended up moving people across the street to not disrupt the Telus building).

For those in Vancouver, an updated address for SIM card sales is now the corner of Richards Street and West Georgia.

Did you line up for a Public Mobile SIM card today? If you’re about to switch, click here to follow our tutorial on how to port over with your iPhone.