Earlier we reported how Telus had organized a busload of 500 employees to protest outside Industry Minister James Moore’s constituency office in Port Moody. Now, two prominent former public figures which are now part of the Telus organization have spoken their minds on the subject.

Former Conservative cabinet minister Stockwell Day (and current director at Telus) has urged the Harper government to delay its upcoming spectrum auction and rethink its wireless rules, which are said to favour Verizon over Rogers, Telus and Bell, despite the latter holding 85% of available spectrum and 90% of the telecommunications market in Canada. 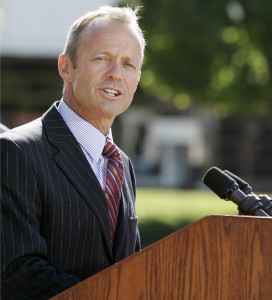 “Protecting the consumer is the right position. I endorse that position,” he said. “In making that case, which they should and which I support, you can miss some of the trees because you’re focused on the forest.”

He added that recent changes in government – such as July’s cabinet shuffle and the movement of senior federal bureaucrats between departments – may also have contributed to a failure to realize the ramifications of holding the auction under the existing rules.

“You’ve got a whole lot of portfolios changing hands,” Day said, “right from ministers to their advisers to the bureaucrats.

Day describes consumers will be “hurt” if Verizon comes to town as it focus on urban centres and “stealing” customers from incumbents, who will then be forced to pause expansion to rural markets. He went on to explain how with one carrier possibly being shut out with only two spectrum blocks available for incumbents, leading to consolidation of the market:

“The unintended consequences eventually will be fewer players,” he said. “Consumer choice ultimately will diminish and therefore ultimately prices will not drop. Prices have been dropping very consistently. But in the end, the consumer will not be best-served.”

In yet another push to gain public support, retired General Rick Hillier, current chairman of the Telus Atlantic Canada Community Board has written an opinion piece to the Ottawa Citizen, stating how Ottawa’s wireless policies can be describe as “Canada Last” since they favour Verizon over incumbent carriers.

He first explains how he never understood the “Canada First” policy during his tenure as the Chief of Defence Staff for Canada from 2005 to 2008, but in the end he changed his mind as Hillier realized supporting Canadian companies “could build world-class organizations” (too bad this policy didn’t work out for BlackBerry, eh?):

Why would we now do the reverse and create a truly baffling “Canada Last” policy by favouring an American giant in this crucial spectrum auction. Canadian companies deserve a level playing field when it comes to access to important Canadian resources like spectrum that is used to deliver services in urban and rural Canada.

How is the “Canada Last” policy helpful in stimulating competitiveness in our rural and urban communities? There are many ways that we can increase competition for the benefit of Canadians and I think we all understand that. So, yes, invite foreign companies to Canada. Woo their leaders, articulate the benefits of being in our country, make our case, don’t suffocate them with bureaucracy – but put them on a level playing field and let the competition begin. Now that, at no cost to us, would benefit Canadians like me, from coast to coast.

With the deadline for applications to participate in the wireless spectrum auction quickly arriving on September 17, expect incumbents to ramp up their lobbying in the final weeks.