Ahead of the WWDC, a source speaking with 9to5Mac suggested that Apple finally will update Maps to its high standards with iOS 8. The milestone event is over and still no trace of major Maps enhancements, except vector-based maps and other “minor” improvements in China.

A recent TechCrunch article sheds light on what kept Apple from introducing the aforementioned improvements. The Maps app remains a reminder for the company how not to launch a service.

According to a tipster speaking with TechCrunch, the delay was caused by a personnel issue and bad planning: because many developers left the company, the planned improvements could not be finished by the time of iOS 8 (beta) release. “Developers had to switch multiple times from project to project,” the source informs.

A second source both corroborates and argues with the first one:

“I would say that planning, project management and internal politics issues were a much more significant contributor to the failure to complete projects than developers leaving the group,” the source said.

Apple Maps was unveiled two years ago with iOS 6. It was a major step for Apple in distancing itself from Google (that year, also, Apple removed YouTube from the pre-installed apps list), but it wasn’t among the company’s best decision. That ultimately lead to an executive reshuffle and Tim Cook issued an apology letter in which the CEO promised to get things done better.

Since then, Apple has acquired mapping companies HopStop, Locationary and Embark, but it seems that we will have to wait a bit more until we will see the acqui-hired technology merged into the controversial mapping service. 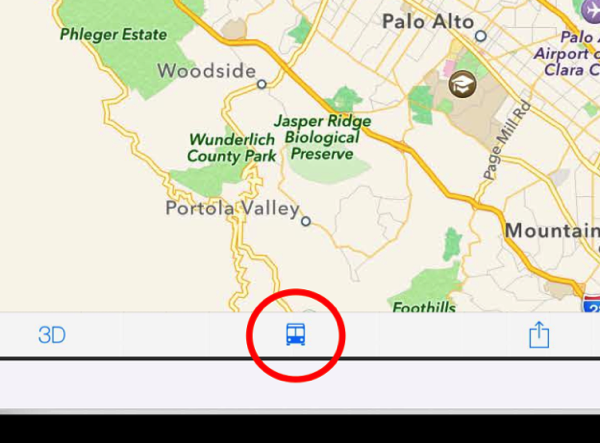 But, there is hope: Apple may accidentally have leaked the forthcoming transit directions feature of Maps. As spotted by an iOS developer (via BGR), a slide in an Apple WWDC video shows a version of Maps where a bus icon is visible in the center of the bottom toolbar between 3D and the share icon. The accidental leak appears to confirm the 9to5Mac report and also shows that Apple is indeed working on bringing transit directions to iOS 8.

The screenshot, which can be seen above, shows an icon of a train or a bus at the bottom center of the screen, which presumably indicates transit directions. It comes from the session titled “Power, Performance and Diagnostics: What’s new in GCD and XPC,” and BGR was pointed to it by Jesper.