Barbra Streisand claims she has convinced Apple to improve Siri’s name pronunciation ability with the next major release of iOS. The famous singer and actress did not contact support, she went directly to the head of the company to issue a fix since the personal virtual assistant, Siri, was pronouncing her name wrong. Oh, and she allegedly was also able to find out when iOS 10 will land. 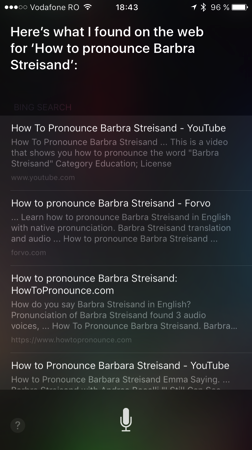 In an interview with NPR (via Billboard), Barbra Streisand took her dissatisfaction with Siri to the public, saying that Siri pronounces her name with a “z” pronunciation. And that’s not the correct way to say it. She may be tried to teach Siri pronounce her name correctly (you know you have this option), but apparently Siri failed to understand that soft “s” in her name.

“She pronounces my name wrong,” said Streisand Saturday on NPR’s Weekend Edition. “With a soft S, like sand on the beach. I’ve been saying this for my whole career.”

After being unable to live with this terrible though that millions of Siri users will learn to pronounce her name incorrectly from Apple’s virtual private assistant, Streisand contacted the company CEO, Tim Cook directly. The phone call with Cook brought two benefits: she has learned that next iOS update (likely iOS 10) will also incorporate a fix and secondly, that this update will be released on September 30.

“And so what did I do? I called the head of Apple, Tim Cook, and he delightfully agreed to have Siri change the pronunciation of my name, finally, with the next update on Sept. 30,” said Streisand.

Does this mean Apple will push back the release of iOS 10 to September 30? Given the rumoured release schedule of the iPhone 7, this seems unlikely, as the handset is said to hit the shelves on September 23.