Although an official announcement has not yet been made, Apple is widely believed to unveil its upcoming flagship ‘iPhone 7’ next month with pre-orders expected to kick off on September 9, 2015. According to 9to5Mac’s latest report, a leaked AT&T retail schedule (shown below) detailing upcoming merchandising reset hours, hints at when we might get our hands on ‘iPhone 7’ from the carriers. 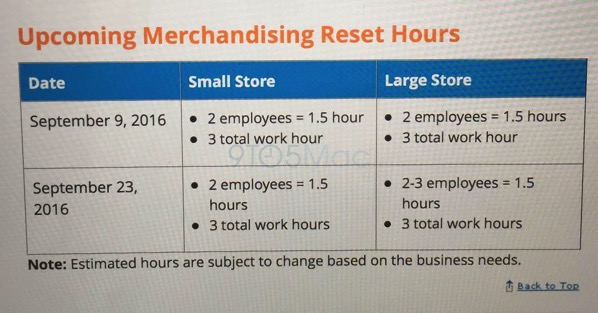 Based on recent reports, it is being speculated that Apple’s September event will be held on September 7, two days after Labor Day and two days before pre-orders. In the light of AT&T’s retail schedule, it is safe to assume that pre-orders are planned for September 9 as expected, while the new iPhone models will hit the shelves on September 23, which is a week later than previously expected date of September 16.

With Canada previously having the same launch schedule as the U.S., it is also safe to predict that the same launch dates will apply here as well. We’ll however only know for sure once Apple officially announces the keynote event, most likely by next week.