French site Nowhereelse speculates that Apple will introduce a bigger iPad dubbed as the iPad Pro or iPad Air Plus somewhere around the end March or early April. The new protective case leaked by a case manufacturer apparently corroborates this claim, although unanswered questions remain, such as how come we haven’t seen any component leaks? 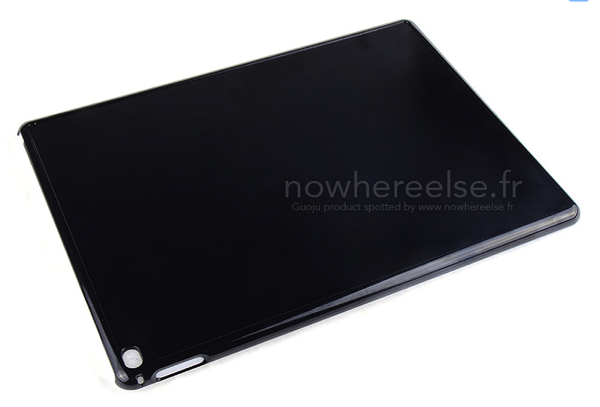 As you can see from the above image, the case has cutouts for the camera and flash, volume, power buttons, and Lightning port but lacks both the cutout we saw roughly three weeks ago on the left side and the speaker cutouts, although that is because of a design decision that leaves the top and bottom edges open. We’ve see such case designs for earlier iPad models, when the case manufacturer left the bottom of the case exposed.

The alleged iPad Pro case leak comes from a manufacturer that also makes cases for the iPad Air 2, so it is taking the opportunity to compare the two cases. Unfortunately, the usually accurate French site “forgot” to ask the manufacturer about the size, so we are still left in the dark as to whether the new device will come with a 12.2- or 12.9-inch display.

This just adds another reason to take this rumour with a grain of salt. Rumours about a bigger-screen iPad have been around for some while, and even well-connected analyst Ming Chi Kuo, though confident of such a device launch, is skeptical about its impact on overall iPad sales.