A freshly posted image sourced to the sometimes-accurate French site NowhereElse comes to break the silence around the iPad Pro or iPad Air Plus. You may recall that little has been the evidence — so far — to prove the existence of the “pro” version of Apple’s tablet. The image inserted below was aimed to back previous claims about this tablet, so whoever made it has been keen to pay attention to what rumours have been circulating so far. 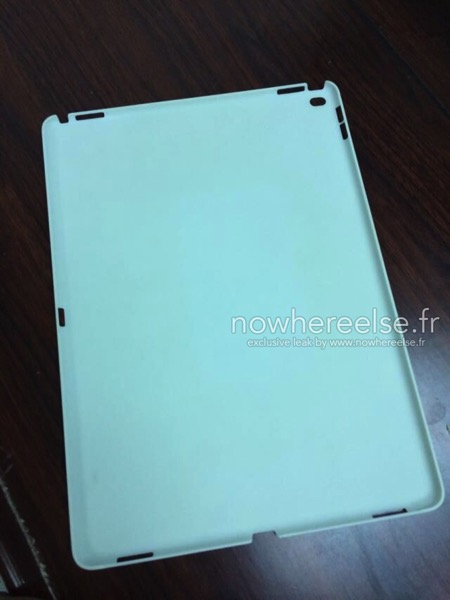 The source has been careful enough to keep any useful information under wraps, so there is no information about its measurements — although we do now have an image of an alleged case of the iPad Pro.

As mentioned above, the case leak apparently corroborates most of the information that has surfaced so far: You can see the four speaker holes, the rear camera hole, the cut for the power button (?), the headphone jack, the lightning port, and the volume buttons.

What remains a mystery is a cutout on the left: can this one be the power button? In the original leaked images, the power button was on the top right. This would mean there was a design change. But what does that button stand for? Lots of unanswered questions.

Take this case leak with a pinch of salt, like we are. And maybe start thinking: will you be taking pictures with a 12.2-inch or 12.9-inch tablet?