But it isn’t just the iPad: tablet shipments overall have seen a year-over-year decline for the second consecutive quarter, the market research company says. In numbers: tablet and 2-in-1 device shipments dropped 5.9% to 47.1 million units for the first three months of the year.

Apple has just reported an amazing second fiscal quarter with high iPhone sales, but iPad sales continue to decline: 12.6 million this year compared to 16.4 million in Q1 2014. As such, Apple currently controls more than a quarter (26.8%) of the tablet market, although it recorded a negative 22.9% growth compared to a year prior. Back then, iPads accounted for 32.7% of the worldwide tablet market. 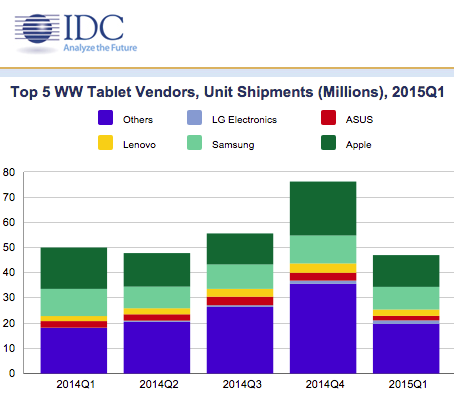 Samsung maintained its second position, with 9 million units shipped — according to the IDC’s data — grabbing 19.1% of the global market, followed by Lenovo, with 2.5 million units (5.3%); ASUS, with 1.8 million units (3.8%); and LG Electronics, which recorded an amazing 1,423% growth by shipping 1.4 million units, says the market research firm.