When Tim Cook was on stage on October 16, he emphasized that the iPad mini topped customer satisfaction surveys with a 100% satisfaction rate. However, this isn’t exactly what JD Power has learned: while we have seen Apple’s score drop in satisfaction surveys before, this is the first time it has been outscored by another tablet, as Amazon’s Fire tablet has taken over first place in the rankings.

The JD Power customer satisfaction study measures a tablet’s performance, ease of operation, features, styling and design, and cost. Now, we all know that the Fire tablet costs much less than the iPad, but as the market research company highlights in its press release, cost accounts for only 11% of the final result.

While overall customer satisfaction with tablets remains steady compared to last year, the importance of cost has grown over time. To put that into numbers, nearly a third of tablet owners have indicated that their choice was driven primarily by price.

“As value-priced tablet brands continue to flood the market, customer attention is turning away from just the price of the device to their perception of the combined value of price, features and performance,” said Kirk Parsons, senior director of telecommunications services at J.D. Power. “Tablet brands that continue to successfully convey more value and package more performance at a reasonable price are more likely to satisfy tablet owners and increase loyalty and advocacy for the brand.”

Although cost accounted for only 11% of the final score, maybe this is what caused the iPad’s score to drop from 830 to 824 in the JD Power consumer satisfaction survey (vol. 2). For the first time, Amazon got the highest score, with 827 points, while Samsung dropped to the third spot with 821 points. 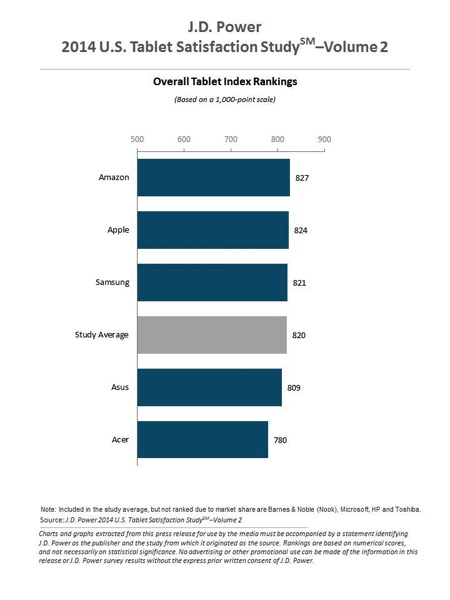