Rogers, Telus and Bell Will Offer iPad Air on Nov. 1

Currently our Big 3 carriers Rogers, Telus and Bell already carry cellular versions of the iPad and iPad mini. Now, all three have announced they will also be carrying the newly announced iPad Air and Retina iPad mini on November 1, the same day as Apple’s launch.

The iPad Air will launch on Nov. 1, while the iPad mini with Retina display, will launch later in November. Rogers customers can take advantage of our Share Everything plans for their new iPad. For $10 a month, they can share data across up to 10 devices.

Telus had this to say:

We’re excited to let you know that TELUS will offer iPad Air with Wi-Fi + Cellular in Canada on November 1, 2013, and iPad mini with Retina display later in November. TELUS will offer these new iPads with a range of attractive data plans that will allow customers on Canada’s most reliable 4G LTE network.

…and Bell as well:

Bell announced that it will offer iPad Air with Wi-Fi + Cellular in Canada on Friday, November 1, and iPad mini with Retina display later in November. Bell will offer these new iPads with a range of attractive data plans that will allow customers to connect to our fast LTE network.

iPad data plans from each carrier which were slightly adjusted in August, but so far have stayed the same: 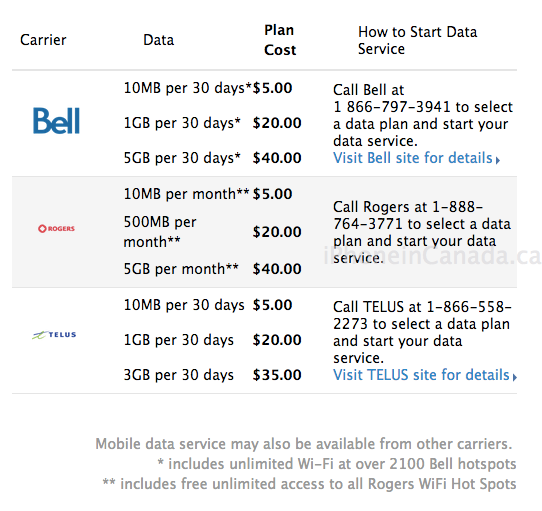 If you’re looking for a cellular iPad, refurbished third generation models are available from Apple.