Update 1: The jailbreak is reported to be released at 12AM PDT. Stay tuned!

It’s been confirmed by Muscle Nerd himself on twitter–redsn0w is being released today! Stay tuned: 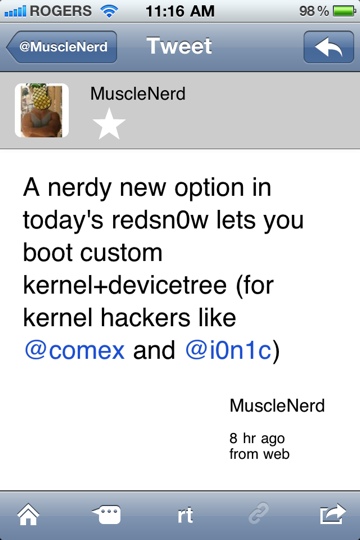 Yesterday, i0n1c teased us with his untether exploit for download (it was an AES encrypted .zip file), and tonight he seems to be hinting at something larger. If #sundayisfunday becomes a trending topic on twitter, i0n1c mentions the iPhone Dev Team might release redsn0w for iOS 4.3.1. He also neither denies or verifies that the latter will come true. Hmm…

Late in the week Muscle Nerd of the iPhone Dev Team confirmed i0n1c’s untether exploit was ‘solid’ and they were still working out the final details for redsn0w.

In late 2009, GeoHot asked for #blacksn0w to trend on twitter before he would release his unlock tool for the iPhone 3G/3GS on iPhone OS 3.1.2. Maybe it’s time we start our efforts to get #sundayisfunday to trend on twitter and find out what will happen? Get re-tweeting folks! Click the tweet button below!