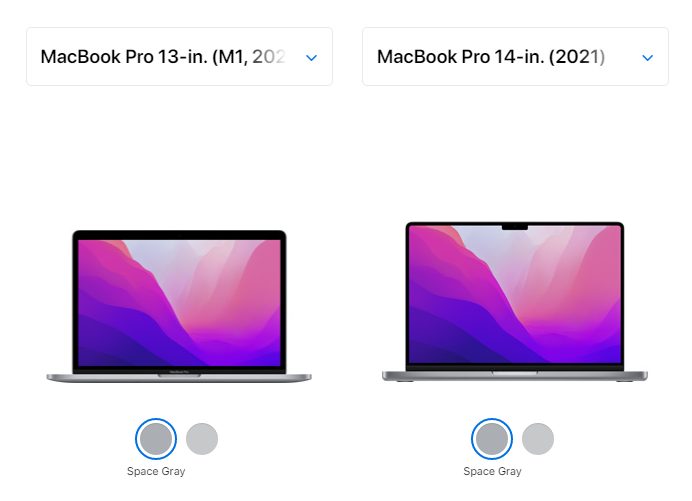 How do this year’s notebooks stack up against the original 13.3″ M1 MacBook Pro from last year that redefined the product line? Let’s compare the 14.2-incher against its predecessor and find out:

With this year’s 14″ MacBook Pro, you get the next generation of Apple Silicon, and a choice between the M1 Pro and M1 Max processors with up to 10 CPU cores.

Both the M1 Pro and M1 Max chips deliver up to 70% faster CPU performance than last year’s M1, according to Apple. No wonder Apple called this year’s MacBook Pro models the “most powerful Mac notebooks ever” in their announcement.

In terms of graphics processing, the M1 Pro boasts twice the performance of the original M1 chip, and the M1 Max promises a whopping 4x performance buff over the M1.

This year’s 14″ MacBook Pro, on the other hand, makes massive leaps in display technology with a new 14.2-inch mini-LED backlit Liquid Retina XDR display. The panel supports Apple’s ProMotion technology and a 120Hz refresh rate, along with a sustained, full-screen brightness of 1,000 nits and a peak brightness of 1,600 nits.

While both of the new 2021 MacBook Pro models do have a notch at the top of the display, the bezels are significantly thinner (by 60%, to be precise) than on last year’s M1 MacBook Pro.

Where its predecessor maxes out at 2TB of high-speed, built-in storage, the 14″ 2021 MacBook Pro offers up to 8TB.

With how power-hungry Apple’s new high-performance chips are, the 14″ 2021 MacBook Pro’s 70Wh battery won’t last you as long as the M1 MacBook Pro’s 58.2Wh pack, but that’s to be expected with a notebook that’s packing this much heat.

As for charging, the M1 MacBook Pro supports 61W charging over a USB-C connection. Its successor, on the other hand, can go all the way up to 96W on a supported USB-C power adapter.

While the M1 MacBook Pro features a rather simple stereo speaker setup, the new 14″ MacBook Pro has a flashy new high-fidelity, six-speaker sound system with force-cancelling woofers that will supposedly knock your socks off.

The speaker setup on the new MacBook Pro also comes with support for spatial audio when playing music or video with Dolby Atmos on built-in speakers.

Both MacBook models are fitted with a 3.5 mm headphone jack, but the one on this year’s model ups the ante with advanced support for high-impedance headphones.

Both models have Touch ID, but the new MacBook Pro does away with the Touch Bar.

The M1 was Apple’s first crack at a full-scale computer processor. The M1 Pro and M1 Max, on the other hand, are refined, powerful behemoths that demonstrate what Apple’s ARM-based chipsets are truly capable of.

Not only does the new 14″ MacBook Pro pack enough firepower to tackle even the most resource-intensive workflows, it also has a slimmer, gorgeous new display that you can even accurately colour grade on, more storage, and more I/O to boot. However, it also costs $700 USD ($800 CAD) more than the M1 MacBook Pro for the base version.

The M1 MacBook Pro ain’t no slowpoke either, though — it spearheaded Apple’s transition to its proprietary chips, is quite the capable performer, and was certainly built to impress.

Essentially, which MacBook Pro model you should go for boils down to the kind of workflow you need a notebook for, what you’re looking for (and willing to settle for) in terms of display, storage, and battery, and most importantly, what you’re willing to pay for it all.

$7,399 CAD for a completely decked out 14″ 2021 MacBook Pro, though? The new MacBook Pro truly embodies the most a MacBook has ever been geared towards professionals.