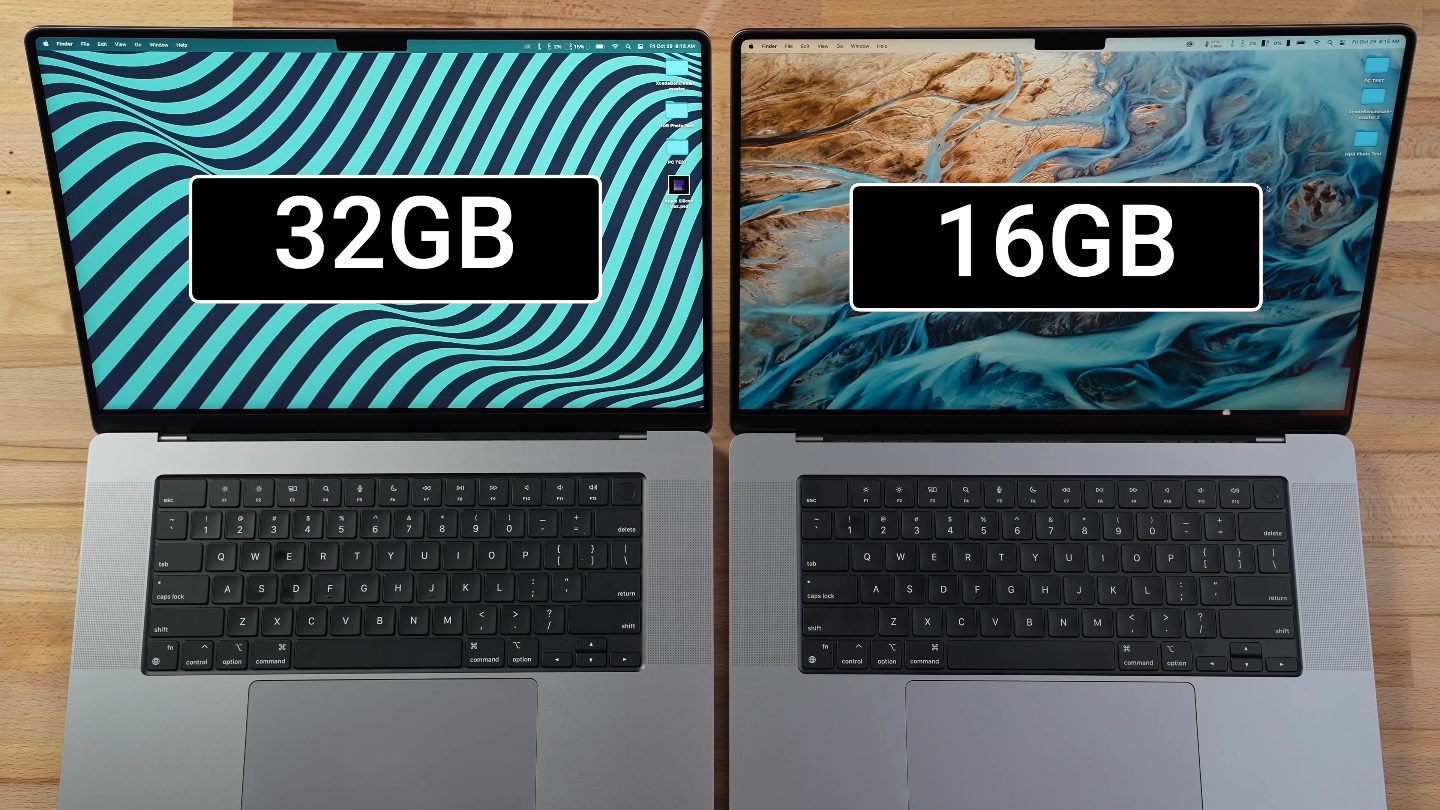 Like the M1 chip from last year, the new M1 Pro and M1 Max SoCs have all of the CPU cores and GPU cores on the same silicon wafer, with a pool of ‘Unified Memory’ to be used as RAM for all of them.

Both the CPU cores and GPU cores on the newer chips are significantly faster than their predecessor, but that’s not all Apple has improved upon. As compared to the base M1, memory bandwidth on the M1 Pro has been doubled to 200GB/s, and the M1 Max doubles that yet again to a whopping 400GB/s.

The 2021 MacBook Pro is available in a number of Unified Memory configurations — 16GB, 32GB, and 64GB (limited to units shipping with an M1 Max chip inside).

So you have to wonder, will paying a premium for double the base memory actually net you any performance gain, especially considering the SSDs on the new MacBook Pro models are some of the fastest to ever ship inside a consumer notebook?

Max Tech set out to determine exactly that, and documented his experience (and thoughts) in a recent YouTube video.

The test started with some light photo editing in Lightroom, and gradually escalated from there by tacking on more and more open programs.

Max Tech slowly turned up the heat, going as far as to open over a dozen resource-intensive web pages in multiple tabs on both Safari and the infamous RAM-hog, Google Chrome, in the background, and then worked on creative projects in the foreground.

Neither notebook broke a sweat, and while the MacBook Pro with just 16GB of RAM reported more RAM pressure and resorted to SSD swapping (where open apps that haven’t been accessed for a while are moved to the internal SSD to be retrieved later) more often, and used more of the SSD for open apps than the 32-gig unit, there was no noticeable increase in latency when bringing up background apps or switching through Chrome/Safari tabs that hadn’t been accessed in a while.

While the 2021 MacBook Pro with 32GB of RAM did complete tasks such as exporting media files faster, the difference between the two notebooks was just 2-3 seconds (well within your typical margin of error).

The YouTuber even conducted what he called an extreme stress test: exporting an 8K ProRes RAW video to H.265 in Final Cut with all of those apps from before still running, and Lightroom also exporting an edited image.

Both notebooks passed the test, which Max Tech admitted even gives their $15,000 Mac Pro a tough time, with flying colours, and the unit with 16GB of RAM was merely 1 second slower than the 32-gig unit.

Essentially, unless you have a workflow that seriously warrants 32GB of Unified Memory on your MacBook Pro, you’d be better off putting the extra money towards an SSD upgrade. On the M1 Pro chip, 16GB of RAM turns out to be quite capable.

Sales for both the 14″ and 16″ 2021 MacBook Pro launched in Canada last week — click here to get yours today from Apple.ca.