Opera Software has announced that its desktop browser has been “Reborn,” this time featuring brand-new functionality with built-in Facebook Messenger and WhatsApp integration. 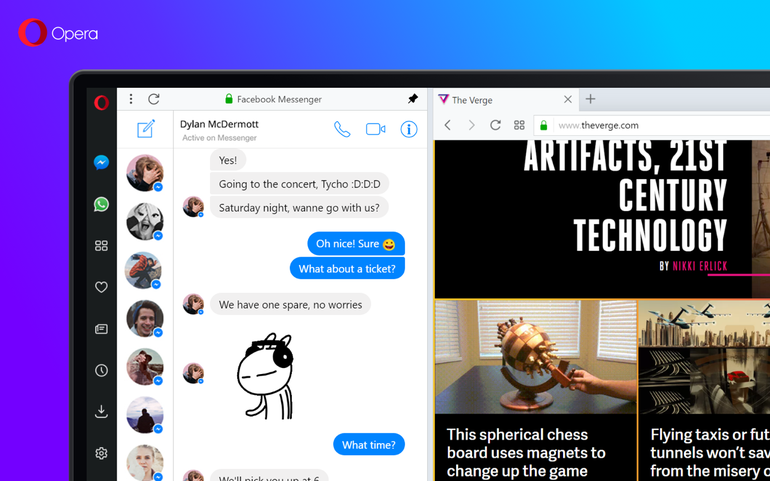 Following a mild visual redesign based on its “Reborn” project, Opera has now given its desktop browser users access to Facebook Messenger and WhatsApp directly from the browser’s side bar. While that doesn’t sound like much of an innovation, it’s particularly useful for those who use these services on a daily basis for work and leisure.

According to a new report from TechCrunch, the Reborn browser supports three messengers: Facebook Messenger, WhatsApp, and Telegram. Once a user has logged in to a messenger it can be overlaid on the main browser window or pinned side-by-side with the current browsing tab. Since many people use more than one messenger, Opera has made it possible to switch between them using keyboard shortcuts.

Additionally, you can quickly share images to these services by dragging and dropping images on the messenger’s icon.

The new chat feature comes from its recently launched concept browser, Neon, which gave the desktop a slightly mobile feel with tabs displayed as icons on the side of the page. It offered features such as split-screen mode and video pop-out windows and serves as the company’s playground for new ideas too edgy for its mainstream browser.

Last year, Opera redefined its browser to give it a completely new look and claiming to give it a touch of “one that truly captures the essence of what browsing the web will look like in the future.” It also included new features such as a built-in ad blocker and a free VPN service.