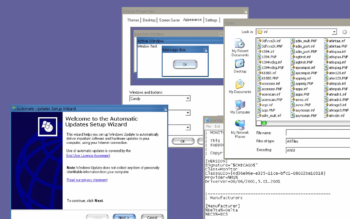 According to The Verge‘s Tom Warren, Microsoft created a Windows XP theme back in 2000 that, by the looks of it, was based on Apple’s Aqua interface for the Mac.

A recent leak of Windows XP’s source code made some of the early work Microsoft did public, and this included some themes that were never publicly released. One of these Windows XP themes, labeled ‘Candy’, carries an uncanny resemblance to the Aqua UI for macOS.

While Windows XP has been virtually extinct for quite some time now, it still manages to make for some interesting headlines every now and then. The newly discovered theme appears to be incomplete, but the Start button and other skinned UI elements clearly resemble Apple’s Aqua UI.

Since both Windows XP and macOS with the Aqua UI were being developed at around the same time, could Microsoft have abandoned the ‘Candy’ theme and opted for the blue-green ‘Luna’ theme instead after getting wind of how similar ‘Candy’ was to Apple’s Aqua UI? That doesn’t seem likely, since the theme was only used in early source code for Windows XP and is also labeled as “for internal use only”.

Whatever reasons Microsoft had for scrapping the ‘Candy’ theme, this leak and the unreleased themes it came with have given us an ever-closer look into the development of one of the most successful desktop operating systems to date.