Unbox Therapy released a video the other day showing that the 32 GB iPhone 7 is significantly slower than the 128 GB or 256 GB versions, and additional testing conducted by others confirms that. Furthermore, some models may have poorer 4G reception than others (via The Guardian). 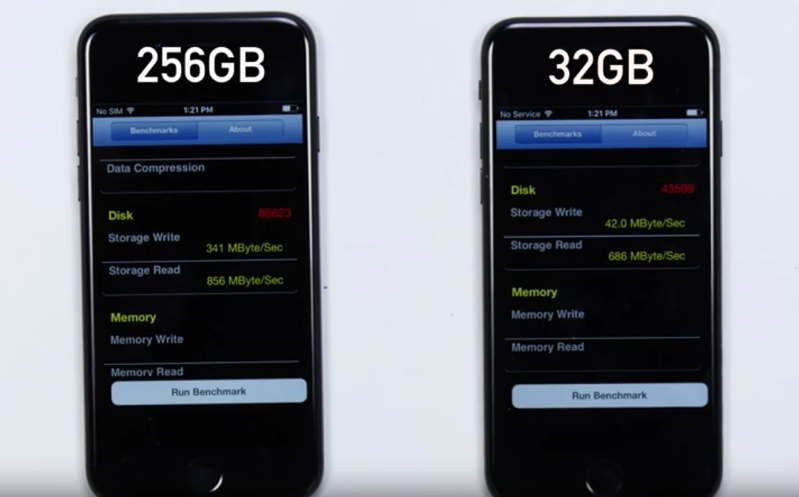 Testing by GSMArena and Unbox Therapy revealed that reading data from the storage of the 32 GB iPhone 7 was 200 MB slower than the 128 GB version, which isn’t noticeable in everyday usage. What is noticeable, though, is the write speed: when you save data (music, videos, photos, etc.) on your iPhone, well, that counts.

As it turns out, the 128 GB iPhone 7 had a write speed of 341 Mbps, which compares to the 32 GB version’s 42 Mbps. GSMArena confirmed Unbox Therapy’s findings, reports the Guardian.

Why? According to How to Geek on why smaller capacity SSDs are slower:

So in reality, this is by design, as a limitation of SSD by capacity si

The difference between the models is the modem: The A1778 and A1784 models carry an Intel modem chip, while the A1660 and A1661 versions incorporate a Qualcomm modem. The Intel-inside iPhones show at least 30% worse network performance (some up to 75%) than those using a Qualcomm modem.

History seems to be repeating itself: The dual sourcing of chips doesn’t seem to work out well for users. Last year Apple issued a comment regarding TSMC vs. Samsung A9 battery life. It remains to be seen whether Apple considers these reports interesting enough to reply. So far, it has refrained from giving any explanation.