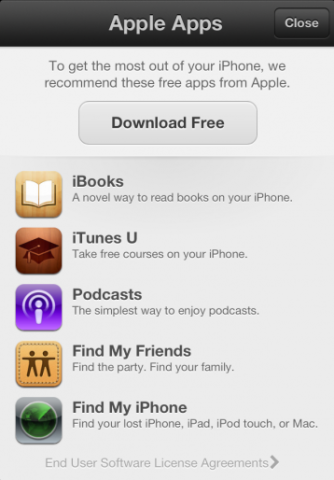 While iOS  6 will launch at an untold time on September 19th, Apple is still tweaking the App-store to include a more helpful experience to newbies. This time they are adding a brand new landing page, or greeting page you may call it.

This new greeting page can be viewed above and will be presented to first-time App-store users. The page promotes free Apple applications such as iBooks, iTunes U, Podcasts, Find My Friends, and Find My iPhone. With a simple tap of the ‘download free’ button, you could install all of them at once.

At the moment all the applications appear to be free of charge. Apple hasn’t thrown a paid application into the mix, such as iWork.

The public release of iOS 6 tomorrow will be free for the iPhone 3GS/4/4S, fourth-gen iPod touch, and iPad 2/3. Stay updated with us to know what time iOS 6 will be released.