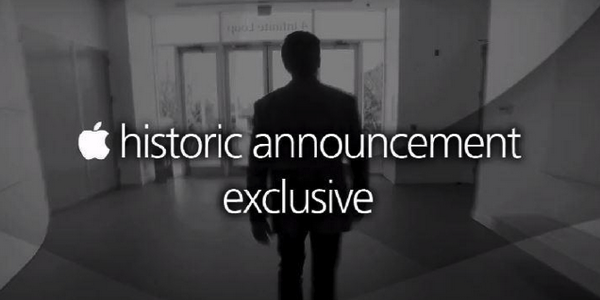 ABC News (a subsidiary of Disney with extremely close ties to Apple) has also started to promote how its reporter, David Muir, is the only anchor with exclusive access to Apple’s upcoming ‘historic announcement’.

24 hours from now #Apple makes history and @DavidMuir is the only anchor there with an exclusive on #WorldNewsTonight http://t.co/G677I5xlJW

Check out the teaser video below (Flash video):

You may recall Muir also had the exclusive interview with CEO Tim Cook when the latter spoke about NSA surveillance and 30 years of the Mac, back in January.

This event is going to be huge. Expectations right now are at an all-time high—let’s hope Apple can meet or exceed them (iPhone 6 x 2, an ‘iWatch’, mobile payments—what else?!). The event starts at 10AM PDT/1PM EDT, and will be live-streamed—just over 12 hours to go, folks!