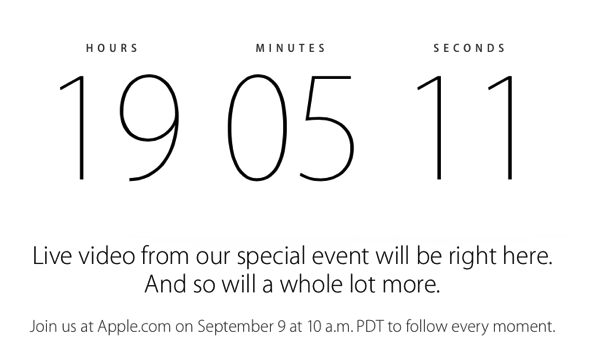 With the company expected to launch two new iPhone 6 models, plus a smart watch rumoured to join in on making mobile payments, this has got to be one of the most highly anticipated Apple events since the iPhone 4.

Apple’s live event will take place at the Flint Center in Cupertino, home to a new mysterious external building the company has built, said to house hands-on areas for product demos, or possibly a music performance.

Cult of Mac, which visited the area, noted security is at its highest levels around the building, as employees and workers are reportedly having their smartphone cameras taped up and photos examined, in an attempt to stop leaks:

The auditorium is crawling with 24-hour security personnel. Anyone working at the massive show, from caterers to construction staff and technicians, is required to submit their phones to Apple’s security team. The phones’ cameras are being covered in special tamper-proof tape, which changes color if removal is attempted.

“If it changes color, we’ll be fired on the spot,” said one person who is working at the show but asked to remain anonymous.

In addition, Apple security personnel are carefully scrutinizing the phones for unauthorized pictures or messages, looking for any attempts to communicate details of the event to the outside.

The bottom line, there are still surprises coming for tomorrow, such as the design of the Apple wearable, which still has not leaked entirely yet compared to what we’ve seen with the iPhone 6, leading many to believe it’s being manufactured at home in the USA, versus the porous Asian supply chain.