Previously, Apple has offered rewards like a lunch with CEO Tim Cook, or getting the chance to meet Eddy Cue via charity auctions and now, the company’s latest CharityBuzz auction is offering its winner a chance to tour its Cupertino headquarters with VP of Education John Couch. 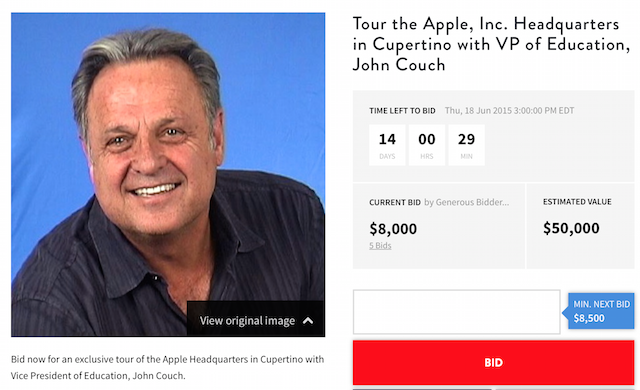 The successful bidder will have to pay for their own accommodations and travel to Cupertino, but will be able to take along another adult and up to three children.

Bidding is scheduled to end on June 18, at 3 p.m. Eastern time. The auction states that the date of the tour is to be mutually agreed upon. So far the auction has secured the highest bid for $8,000, which is well below an estimated value of $50,000.

Proceeds from the auction will go to the Giant Steps Therapeutic Equestrian Center north of San Francisco, which offers horse riding to children and adults with disabilities.