According to recently published data from market research firm Canalys, Apple was the only smartphone vendor to achieve positive market share growth in the third quarter as global smartphone shipments fell 9% year-over-year, marking the third consecutive quarter of decline.

Apple maintained its second position in the global smartphone market, raising its share by 20% year-over-year from 15% in Q3 2021 to 18% in Q3 2022. Samsung retained its lead in the market, with its share going up a single percentage point to 22%. 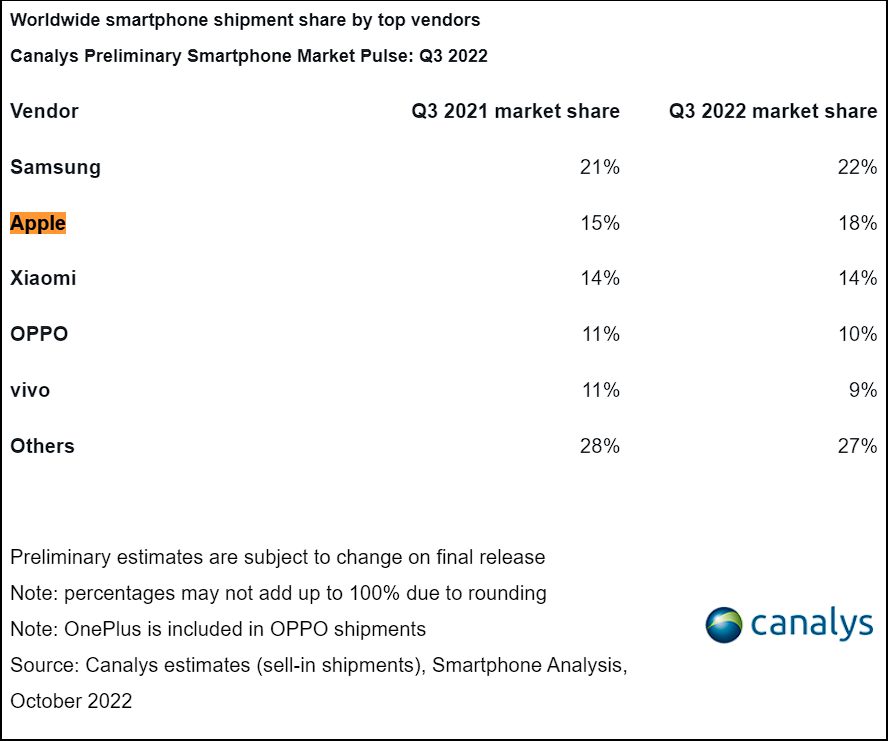 Chinese smartphone manufacturers, meanwhile, saw their respective market shares either stagnate or drop a percentage point or two across the board.

Global demand for smartphones has been taking a beating as of late due to the ongoing economic downturn. Even so, things have still been looking up for Apple — iPhones surpassed Android sales in the U.S. for the first time ever during the second quarter.

“For most vendors, the priority is to reduce the risk of inventory building up given deteriorating demand. Vendors had significant stockpiles going into July, but sell-through gradually improved from September owing to aggressive discounting and promotions. The pricing strategy of new products is cautiously crafted, even for Apple, to avoid significant pushback from consumers who now tend to be very sensitive to any price hike.”

Liu’s last point is evidenced by the fact that Apple didn’t raise iPhone prices in the U.S. with last month’s iPhone 14 series launch, despite analysts predicting it would. However, some regions such as Japan still saw price adjustments on account of their local currency’s weakness.

The global economic decline will likely continue to put a damper on smartphone sales for the next six to nine months, Canalys estimated.

“As demand shows no signs of improvement moving into Q4 and H1 2023, vendors have to work on a prudent production forecast with the supply chain while working closely with the channel to stabilize market share,” said Canalys Analyst Sanyam Chaurasia.

Apple last month increased iPhone 14 Pro production by about 10% while lowering its forecast for the entry-level iPhone 14 in response to strong demand for this year’s flagship models.

“Going into the sales season, consumers who have been delaying purchases will expect steep discounts and bundling promotions as well as significant price reductions on older generation devices. Compared to the strong demand period of the previous year, a slow but steady festive sale is anticipated in Q4 2022. However, it will be too soon to see the upcoming Q4 as the real turning point of market recovery.”