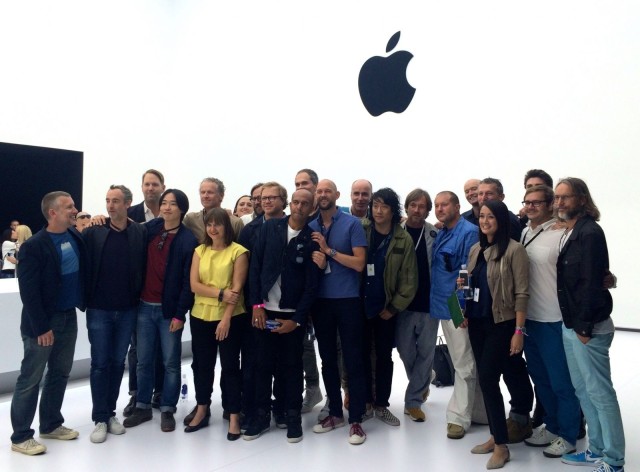 Shown above is the very first photograph of Apple’s industrial design team, which was taken yesterday inside Apple’s new “Hands-On Pavilion following the Apple Watch unveiling at the Flint Center for the Performing Arts in Cupertino. The photo shows the men and women behind the iPhone, iPad, Apple Watch and handful of other best-selling Apple products (via CultOfMac).

“The Industrial Design team is Apple’s idea factory. This is where Apple’s innovation comes from. They design and develop all of Apple’s products, and many of them were working at Apple before Steve Jobs returned in 1997.

The 22-person team works under the guidance of Sir Jony Ive, Apple’s senior VP of design. They toil in Apple’s ultra-secretive Industrial Design studio, a steel-and-concrete enclave locked behind a very big door and frosted windows on Apple’s campus. The studio was where Steve Jobs spent most of his time before he died, working on new products with Ive and his team.”

The group, which has only been pictured once before, is super-secretive and rarely appears in public together. The above picture was taken at the end of yesterday’s special event, when many of the journalists had left. In the middle is Jony Ive and the team’s latest and highest-profile hire, star designer Marc Newson.