Since Apple introduced the iPhone 5s and 5c, multiple reports have pointed to a successful launch. First there was the 9 million first-weekend sales and then the number of active iPhone 5s and 5c devices has suggested that the handset’s adoption is happening at an accelerated pace. The latest Kantar Wordpanel Comtech’s report cools down these initial reports, however (via TechCrunch).

Looking back over the past three months to October 2013, Kantar says the iPhone 5s and 5c have helped Apple boost market share compared to previous months, but it hasn’t had the same “uplift” it reported a year ago, when the iPhone 5 was released. What’s interesting though is that “Apple’s share of US Smartphone sales during the month of October was 52.8% (not shown in tables), but it was 40.8% during the 3 month ending period to October,” Dominic Sunnebo pointed out in an email sent to iPhone in Canada.

“In almost all markets, the iPhone 5S and 5C releases have given iOS a significant bounce compared to the previous month. Generally, Apple’s share of the market still remains lower than when the iPhone 5 was released, although this is not wholly unexpected as shoppers tend to react more positively to ‘full’ releases than incremental improvements such as the 5S and 5C. 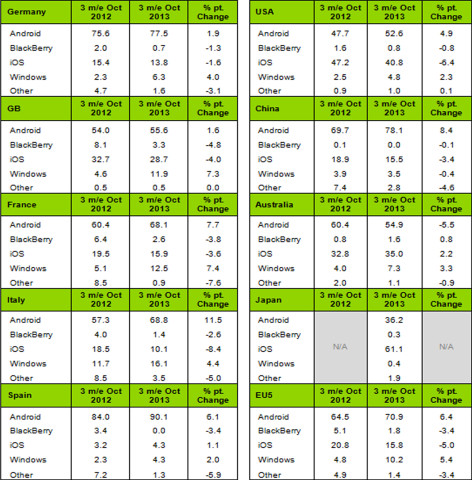 Android remains the No. 1 smartphone platform of choice, accounting for 71% of all sales in 12 key markets measured by the market analytics company. The iPhone, on the other hand, accounted for 21% of all smartphone sales.

“The cheaper 5C appeals to a broader audience than Apple usually attracts. In the US, the biggest demand for these mid-end models is coming from lower income households. Some 42% of iPhone 5C owners earn less than $49,000 compared with just 21% for iPhone 5S. […]  Almost half of iPhone 5C owners switched from competitor brands, particularly Samsung and LG, compared with 80% of 5S owners who upgraded from a previous iPhone model.”

It is worth mentioning that Apple has reached 76.1% of market share in Japan, thanks to the NTT Docomo deal, but according to Kantar’s data the company’s share in the US is lower, where the iPhone accounted for 52.8% in October.