Apple has officially updated its Apple Maps service with data and satellite imagery for its new headquarters, Apple Park. The company’s new campus is expected to open next month. 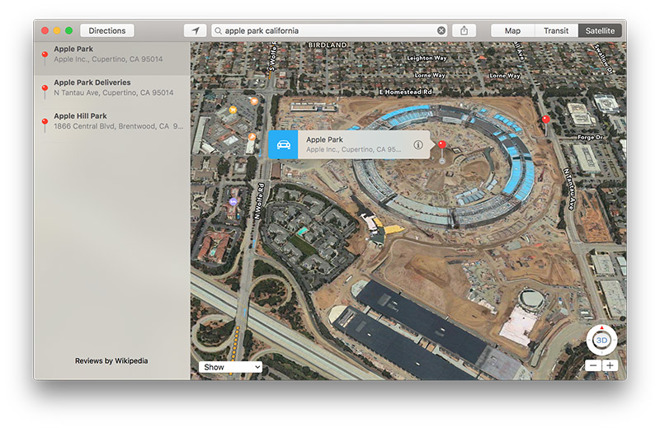 According to a new report from 9to5Mac, the Apple Maps update added satellite and drone imagery, as well as related geolocation tags, including Apple Park, the company’s headquarters that is currently under construction in Cupertino, California.

In Apple Maps, the headquarters is now complete with images, flyover functions, and descriptive indications of the main areas of the building. Users can now enjoy three-dimensional views of the Apple campus, though it is more than likely that many of the images of the building are not up to date; many images show the incomplete installation of solar panels on the roof of the main structure.

Drone video shot in July to August of last year appear to depict roughly the same state of construction progress as seen in Apple Maps.

The update also include destination information, a physical address and building tags, including a data tag for Steve Jobs Theater. As it does for other points of interest, Apple Maps aggregates photos and general information about Apple Park from the internet, in this case user-submitted photos from Wikipedia.

“The new Apple Park campus still isn’t always the first result when you type ‘Apple Park’ into Maps, but it is now one of the options,” reads the 9to5Mac report. This is likely due to the fact that the change is still propagating to everyone, so expect its placement to vary. Prior to this recent update, however, Apple Park would not show up at all in Apple Maps.

Apple is expecting to open Apple Park some time next month, at which time it expects more than 12,000 workers to start making the migration from its current headquarters. The move is estimated to take over six months to complete.

The display technology experts over at DisplayMate have crowned the iPhone 14 Pro Max's screen the best to ever grace a smartphone, giving it their highest-ever A+ rating and "Best Smartphone Display Award." DisplayMate is one of the world's leading authorities on display technology. The corporation's reviews and reports are based on comprehensive, objective laboratory tests...
Nehal Malik
33 mins ago