Looks like the memo has finally been sent out regarding unlocked iPhone 6 sales at Apple Canada retail stores.

We’ve been asking Apple Stores both on the phone and online this week whether unlocked iPhone 6 sales would be available on the September 19 launch date. We couldn’t get any direct answers or confirmations until today.

The Apple Stores in Montreal (Sainte-Catherine), Brossard, Pointe-Claire, Laval and Toronto (Sherway Gardens) all confirmed over the phone unlocked iPhone 6 sales would be available on launch day. Even Apple’s online chat confirmed unlocked sales on September 19 too. 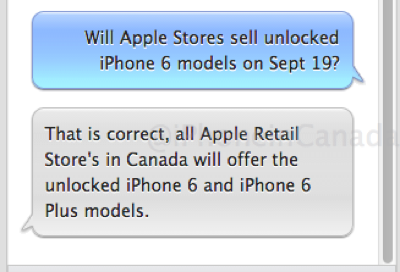 Last year, no online iPhone 5s pre-orders were available, as sales started both online and in-store on launch day. People seeking the availability of unlocked units on launch day in stores became a priority question after Apple removed the option for the iPhone 5 launch, to reportedly focus on contract sales instead. So as you can imagine, those unaware and waiting all night in line were in for a shocking surprise.

Online pre-orders for iPhone 6 were already confirmed to start at midnight PDT/3AM EDT tonight (as expected). Don’t forget to take our poll here to tell us what model you’ll be ordering.