Apple will report its past-quarter earnings tomorrow, and analysts have prepared their best shot at predicting the company’s sales. As usual, Fortune ran its poll of more than two dozen analysts – pros and amateurs – and the consensus is that Apple may have “another surprise up its sleeve”.

The speculation is noteworthy in the light of the previous quarter’s results, which were beyond Wall Street’s expectations – although analysts were disappointed by the low iPad sales.

Now, for the past quarter, the consensus among the 27 analysts Fortune surveyed is that Apple will report revenues of $38.4 billion, with amateurs predicting higher revenues, of course.

Fact is, a lot has happened during the past three months: Apple acquired Beats for $3 billion, split its stock 7-for-1, and introduced a low-cost iMac.

JP Morgan’s Katy Huberty has been vocal in her notes to investors that Apple will set the benchmark higher for Q3 iPhone sales this year, as her Alphawise tracker, which has been reasonably precise, has suggested high iPhone sales driven by new partners and new markets.

Normally, iPhone sales are weak during this quarter, as people have a tendency to hold off until the next model comes out in a few months. But from the analysts’ perspective, Q3 2014 will be different. 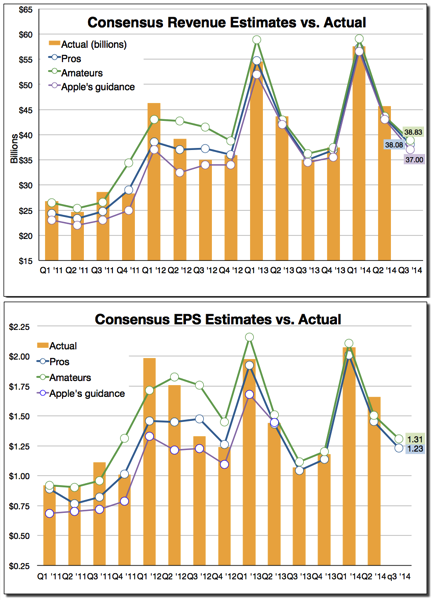