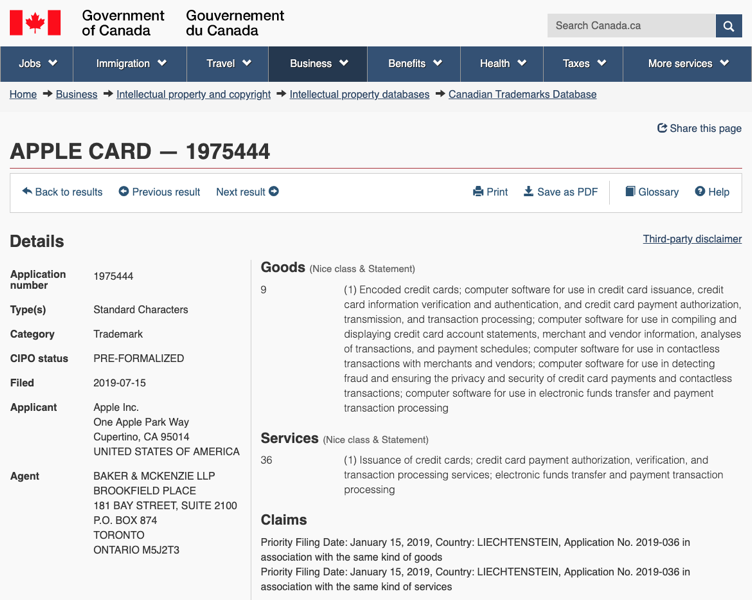 Apple Card is currently set to launch only in the United States, but Apple may be planning to debut the credit card in Canada at some point.

Earlier this week on July 15, 2019, Apple filed an application (#1975444) with the Canadian Intellectual Property Office, for the ‘Apple Card’ trademark (via MobileSyrup). Apple Inc. is listed as the applicant, which saw the filing done by agent Baker & McKenzie LLP.

The trademark application mentions encoded credit cards and also the issuance of credit cards for example, so it’s clear this is for a potential launch of Apple Card in Canada if it ever decides to debut here.

Apple has partnered with Goldman Sachs for its U.S. launch and an executive of the latter did mention an international launch of Apple Card was expected at some point. Apple Card is a digital credit card from Apple, “built on the principles of simplicity, transparency, and privacy.”

The trademark application for Apple Cash has not been approved yet by CIPO. Given how long Canadians wait for Apple features to debut here, I wouldn’t hold your breath for Apple Card to debut anytime soon. We still don’t have Apple Cash here, or the ECG app for Apple Watch Series 4 (but Apple already confirmed that is coming soon).