According to a new report by 9to5Mac, Apple will launch its Transit service with iOS 9 and is planning to debut bus, subway, and train route navigation as the central upgrade to the Maps app in iOS 9 at the forthcoming WWDC event. Unnamed sources are claiming that the Transit directions service would allow iPhone users to navigate mass transit via the official Apple Maps application. 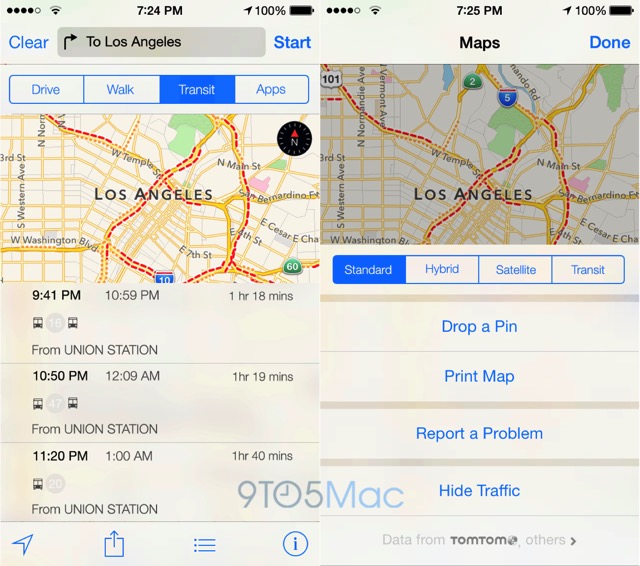 The source adds that the transit functionality for Maps includes larger icons for users to more quickly spot airports, subway stations, and train stations within the Maps app. Furthermore, the report claims that Apple will also introduce a new trip planning feature for transit, and a new Transit view alongside the existing Standard, Hybrid, and Satellite/Flyover views. Lastly, Apple is also said to be working on updating the iOS Maps to help users navigate major buildings, offices, and landmarks, as part of its indoor mapping project.

“Due to personnel issues, data inconsistencies, and coverage for only a small subset of Apple’s major markets, Apple decided to pull transit functionality from iOS 8 very late into development, sources indicate. The feature was apparently present in internal iOS 8 betas well into the summer of 2014, despite the lack of an announcement at last year’s Worldwide Developers Conference. Since that time, however, Apple has refined the data, added new cities, and developed a new push notifications system that will notify users as new cities gain support”.

Previously, it has been reported that iOS 9 will bring the new San Francisco font that debuted on Apple Watch and will also feature a brand new ‘Home’ app to control the HomeKit-compatible accessories with iOS devices.

Taiwan Semiconductor Manufacturing Co. (TSMC), Apple’s primary chip supplier, will also produce advanced 4-nanometer chips at its $12 billion USD under-construction manufacturing facility in the U.S. state of Arizona — reports Bloomberg. The information comes from people with knowledge of the matter, who said TSMC will announce the new plan next week during a ceremony at...
Nehal Malik
51 mins ago