The B.C. provincial government has announced this morning distracted driving fines are set to increase, as of June 1, 2016.

Starting next month, distracted driving offences will now start at $368, more than double the previous fine at $167, plus come with four demerits, versus three from before. They will also be combined with ICBC penalty point premiums, starting at $175 for the first offence and increase for additional offences within a one-year period.

First-time distracted driving offenders will receive a minimum $543 in fines, while repeat offenders nabbing their second offence within 12 months, will see a $368 fine plus $520, for a total of $888, plus even higher fines for repeat offences. 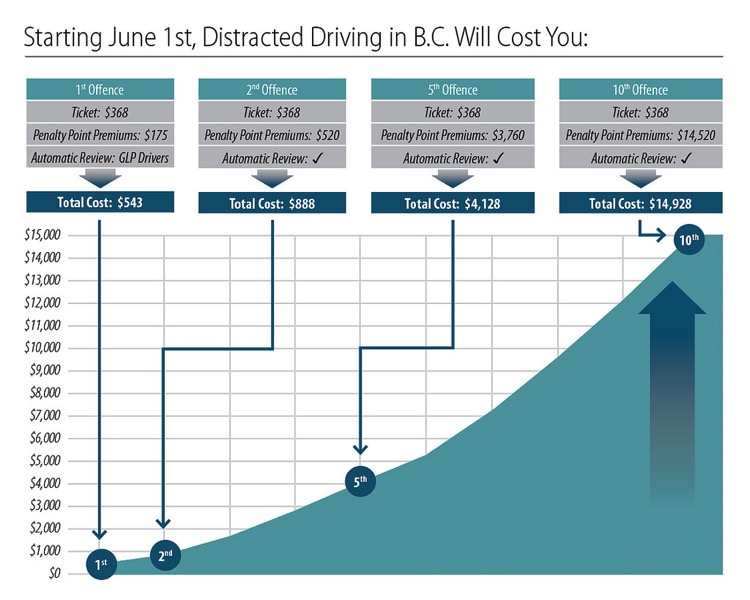 Back in March, one driver in Richmond, B.C. shocked the RCMP with her 12 distracted driving convictions since 2011. Later, she ended up getting banned from driving due to her lengthy record.

Todd Stone, Minister of Transportation and Infrastructure, said in a statement “Today’s announcement of significantly higher fines for distracted driving and four penalty points sends the message loud and clear – we will not tolerate distracted driving on our roads.”

Distracted driving is also now considered a “high-risk” driving offence, on the same level as excessive speeding and driving without due car and attention. Repeat offenders will now have driving records subject to automatic review, possibly resulting in a 3-12 month driving ban.

The province says 2014 saw 66 deaths occurred partly by “distracted and inattentive driving”, while injuring 630 on B.C. roads. In the past three years, roughly 50,000 distracted driving tickets have been issued annually.

Recently released iOS 16.3 has fixed an Apple Maps security bug that may have allowed some apps to collect user location data without permission, 9to5Mac reports. Last week, Apple released iOS 16.3 and iPadOS 16.3 with a bunch of new features including: Support for physical security keys as part of the two-factor authentication sign in...
Usman Qureshi
12 mins ago

Apple has launched MLS Season Pass globally on the Apple TV app, ahead of the 2023 season that kicks off on February 25, 2023. An MLS Season Pass will provide fans all MLS and Leagues Cup matches, plus hundreds of MLS NEXT Pro and MLS NEXT games as well. Apple says there’s some free on-demand […]
Gary Ng
38 mins ago

Anker has finally broken its silence on the eufy Security fiasco. eufy is Anker's privacy-centric smart home security brand, which landed in scalding hot water after its always-encrypted, local storage-only surveillance cameras were found to be streaming unencrypted live footage that could be accessed through a simple media player. Responding to many calls for answers...
Nehal Malik
39 mins ago