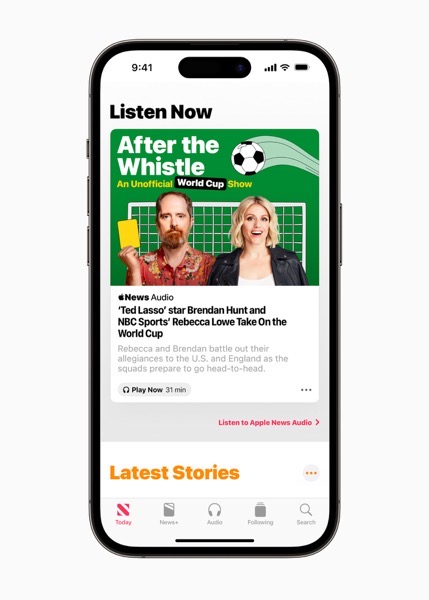 In addition to appearing as Coach Beard on Ted Lasso, Hunt is a lifelong soccer fan who closely follows Major League Soccer and the English Premier League.

Lowe has been a beloved soccer host in the UK and the US for nearly two decades, and is currently hosting her 10th season of NBC Sports’ coverage of the Premier League.

Developed in partnership with Meadowlark Media, After the Whistle will bring listeners an entertaining and informative take on all of the action throughout the World Cup tournament.

Throughout the series, hosts Hunt and Lowe will recap all the exciting moments, battle out their allegiances to the American and English teams, and break down key plays, wins, upsets, off-field moments, and more.

“Apple loves soccer — from Ted Lasso to Major League Soccer, and now two of the game’s most exciting voices delivering listeners their take on all of the biggest moments of the tournament,” said Eddy Cue, Apple’s senior vice president of Services.

After the Whistle will premiere on November 17, 2022, and will be available for free in Apple News and Apple Podcasts.