Apple Pay finally expanded in Canada yesterday to Visa and MasterCard (and Interac), with support coming from RBC and CIBC, while TD, Scotiabank and BMO are set to come on board in mid-June.

With Apple’s mobile wallet no longer limited to American Express, this is now Canada’s time to demonstrate our vast contactless payment infrastructure. 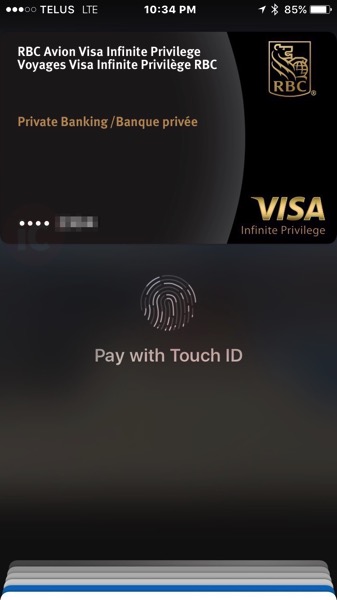 Greg Weed, director of card performance research from consulting and research firm Phoenix International, told the Toronto Star Touch “Canada is attractive for Apple Pay,” adding  “It’s small but important for Apple in terms of showing how to build usage.”

Canada’s advantage, says Weed, is our vast network of terminals that accept pin-and-chip cards plus NFC for contactless payments, including Apple Pay, compared to the U.S.

Moneris, Canada’s largest credit and debit card processor, notes 85 per cent of their terminals are Apple Pay ready, with over 66 per cent of those merchants already processing contactless payments, saying “consumer adoption of Apple Pay is expected to increase significantly,” with this network in place.

Although Weed believes Apple Pay in China will be the iPhone maker’s “big prize”, Canada can act as a marketing showcase for Apple Pay “that sorts out some of the problems they’ve had in building volume in the states.”

Apple Pay support from Canadian banks was delayed, according to Apple, because both parties spent more time to integrate tokenization for Interac, the debit card network from our financial institutions.

Sources told The Globe and Mail yesterday Apple apparently led Apple Pay negotiations with our big banks, with the latter agreeing to interchange fee rates similar to those accepted by U.S. banks.