In just over four years since its global release in March 2016, Supercell’s Clash Royale has surpassed $3 billion in lifetime revenue to become one of the top-grossing mobile games of all time, Sensor Tower is reporting. No other game of similar design has so far been able to come close to replicating Clash Royale’s success. 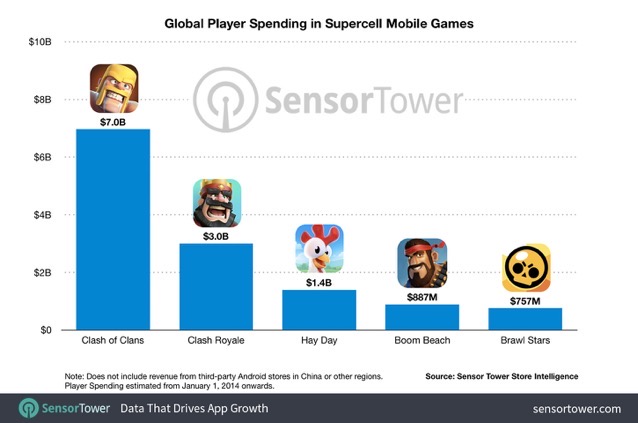 Interestingly, the game still sits at No. 2 on the list of top-grossing mobile games of all time as Supercell’s other smash-hit title Clash of Clans has been able to generate close to $7 billion to date since January 1, 2014.

The App Store accounts for the largest share of revenue, picking up $1.6 billion, or 52.4% of all player spending, whereas Google Play has generated $1.4 billion in revenue or 47.6%.

To date, Clash Royale has accumulated 468.8 million lifetime downloads. The U.S. ranks No. 1 for installs, racking up 53 million, or 11.3 percent of all downloads. Brazil ranks No. 2 with 51.7 million installs, or 11 percent, while Russia rounds out the top three with 26.8 million, or 5.7 percent.

Meanwhile, Supercell’s Hay Day has accumulated $1.4 billion since January 2014, Boom Beach has accrued $887 million, and Brawl Stars has picked up close to $757 million.

Twitter owner and CEO Elon Musk could potentially sell up to $3 billion USD in new Twitter shares to help repay part of the $13 billion debt the social media company took on as a result of his buyout — reports The Wall Street Journal. According to the publication's sources, Musk's team discussed selling new...
Nehal Malik
42 mins ago