Apple’s special event is one day away, ready to take place at the Steve Jobs Theater within Apple Park, the iPhone maker’s $5 billion new headquarters. According to Venture Beat, the venue only gained last minute approval from the City of Cupertino to hold the event, given construction in the surrounding campus is still being completed:

According to records from the City of Cupertino, Apple applied on August 8 for a Temporary Occupancy Permit for the theater, which is located at 10501 N Tantau Ave, Cupertino, CA. This permit is essentially a waiver indicating that a structure has been inspected, though some work remains incomplete. 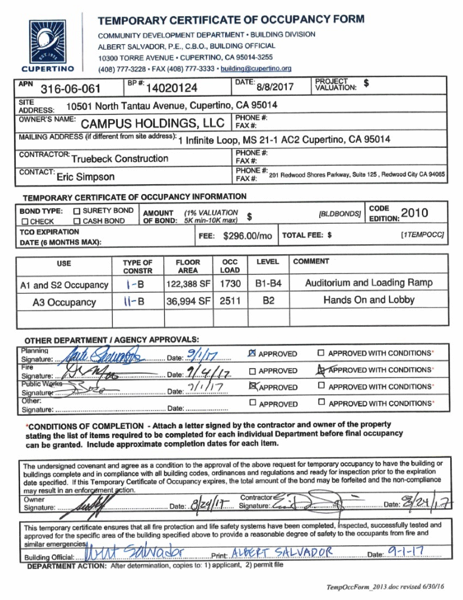 The Occupancy Permit was signed on September 1 by a Cupertino official—one day after Apple had sent out invites to the press announcing the September 12th event, which has the tag line “Let’s meet at our place.” The permit indicates all fire and and safety systems were inspected, while also allowing Apple to temporarily occupy the space, such as the auditorium itself, loading ramp, and lobby, where a hands-on demo area is expected to take place.

The Steve Jobs Theater will have two custom rotating elevators, while also have a hidden demo room. The theater seats 1,000 and occupies four stories underground. Press will be sitting on leather chairs, said to cost $14,000 each.

Apple is expected to announce the new OLED iPhone X, iPhone 8, iPhone 8 Plus, Apple Watch LTE and 4K Apple TV. Details of these products were revealed in a leak of iOS 11 GM, by what many are suspecting a rogue employee.