Apple is hosting an event next week on September 12 to announce some new products – including what we expect will be the iPhone 8 – but it’s the first time the company has held a press event at its new Apple Park location. 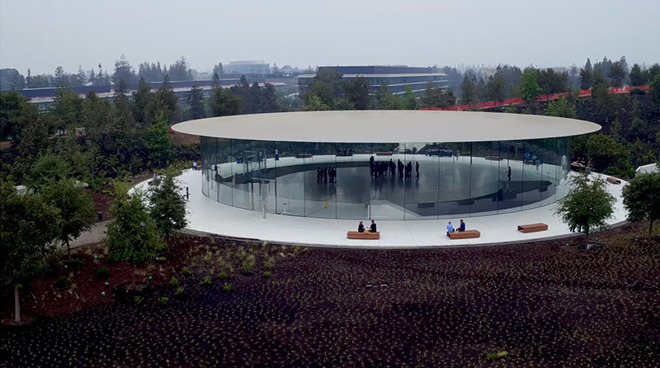 The tech titan’s sparkling new campus recently began welcoming workers through its doors, while a new drone video shows that finishing touches to elements such as landscaping are heading toward completion.

Shot under gray skies in Cupertino, California, Duncan Sinfield’s aerial video shows off not only the striking “spaceship” design of the main building, but also the impressive-looking Steve Jobs Theater, set to be used for the first time next week when Apple CEO Tim Cook is expected to unveil new iPhones, hopefully along with some other good stuff.

Steve Jobs Theater, which is positioned a little distance away from the main campus structure, features an auditorium located beneath the ground and is large enough to hold around 1,000 people. It features an eye-catching lobby with a circular, all-glass wall topped off with what Apple claims is the largest carbon-fiber roof ever made.

The roof, believed to weigh 80 tons, was built by Premier Composite Technologies in Dubai before being shipped — in pieces — to San Francisco. Sinfield shows two flyovers of the lobby in his video, one at the 48-second mark and another at 1:50.

Apple has been feverishly working to get the theater completed for the unveiling of the 10th anniversary iPhone. It is widely expected the company will announce three new iPhones, a new 4K Apple TV, and a new LTE Apple Watch.

Check out the footage of Apple Park and the Steve Jobs Theater below.