As expected, Apple has just officially announced its fall special event for iPhone 8, set for September 12, 2017. Members of the press began sharing images of their invites, which have a tagline “Let’s meet at our place.” (via The Loop).

The event will take place at 10AM PDT/1PM EDT, as Apple says “Please join us for the first-ever event at the Steve Jobs Theater in Cupertino.” 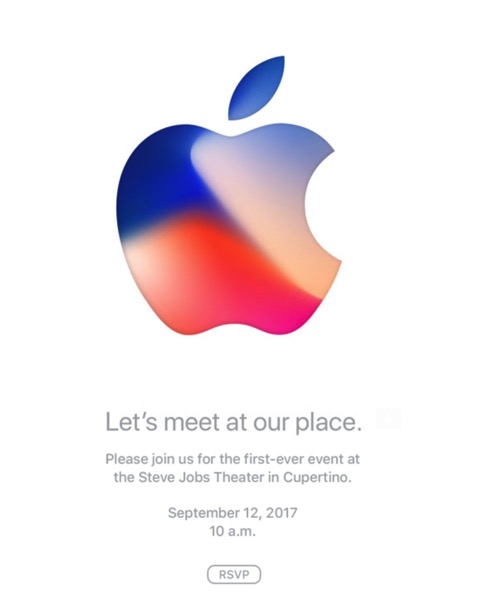 (Nerd note: This is the first Apple Event invitation to feature an automated ticket workflow. The invitation email features a click-to-RSVP link that leads to an RSVP page that, in turn, generates an Apple Wallet ticket complete with barcode.)

Apple is expected to release updated iPhone 7s and iPhone 7s Plus models, plus an all-new iPhone 8, said to include face recognition, a new OLED display and lack a Home button. The company is also rumoured to debut Apple Watch models with LTE capabilities, plus a new 4K Apple TV.

Of course, we’ll find out release dates for final versions of iOS 11, watchOS 4, tvOS 11 and macOS 10.13, while probably hear more about HomePod.