The world will be watching Apple’s WWDC 2014 keynote live tomorrow morning at 10AM PDT. As always, excitement is in the air as to what Apple might unveil tomorrow. But you need to keep your expectations in check, or else you’ll be sorely disappointed.

Here’s what we expect Apple to announce tomorrow, based on what the company has done in the past and what connected insiders are saying (such as the WSJ, sometimes known as an unofficial PR mouthpiece).

Shortly after we heard about iWork for iCloud, followed by a promo clip of Jony Ive’s mesmerizing description and introduction of the all-new iOS 7. Eddy Cue came on stage to unveil iOS in the Car (now known as CarPlay), automatic app updates and then—iTunes Radio.

Apple will most likely again dedicate two hours for their keynote and it’s usually jam-packed with demos. With this in mind, don’t expect anything out of the ordinary tomorrow (like new iPhones or an iWatch), other than the usual suspects of updates for iOS and OS X as the major focus.

Speaking at Code Conference, Eddy Cue said Apple’s upcoming product line up is the best he’s seen in 25 years at the company. Most likely these will debut in the fall to ramp up for the holiday quarter and busy shopping season (because KGI Securities analyst Ming Chi Kuo says so and his track record is decent).

While you’re getting ready for bed tonight—developers are already waiting in line for a front row seat for tomorrow’s keynote, reports the SFGate:

Santosh Shetty, an engineer with Physicians Interactive of Mumbai, India, got in line about 5 p.m. Sunday – a full 17 hours before CEO Tim Cook is scheduled to start his keynote. Shetty figured if he came such a long distance to watch the keynote, he might as well sacrifice a cold night on the sidewalk to get a good view.

“You can also see it on the website, but seeing it live is a different experience,” he said. “And when you’re seeing it live, you’d rather be in the front rather than be in the back.” 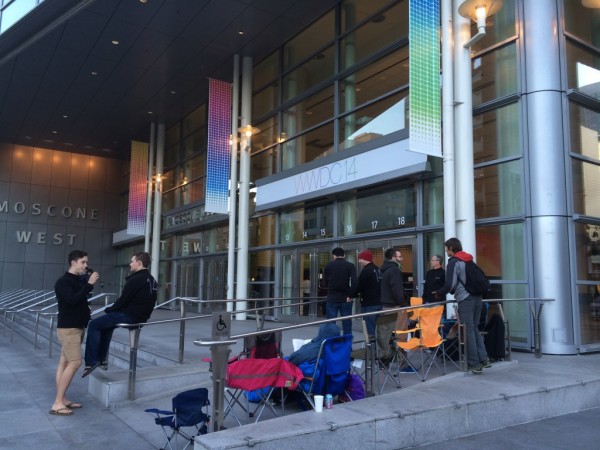 You gotta love these guys. Come on, you’d also do the same.

Get ready for tomorrow’s live streamed keynote, set to kick off at 10AM PDT/1PM EDT. We’ll also be sending updates live on Twitter followed by full coverage of all the latest updates right here.

Apple is expected to reveal more iBeacon plans at its World Wide Developers Conference in San Francisco starting Monday, where it also intends to preview new versions of its iOS mobile-operating system and Mac OSX software. To promote iBeacon, Apple will place beacons throughout Moscone Center and offer sessions for developers on how to implement the technology.