Google Pixel 6 vs. Pixel 6 Pro: What are the Differences? 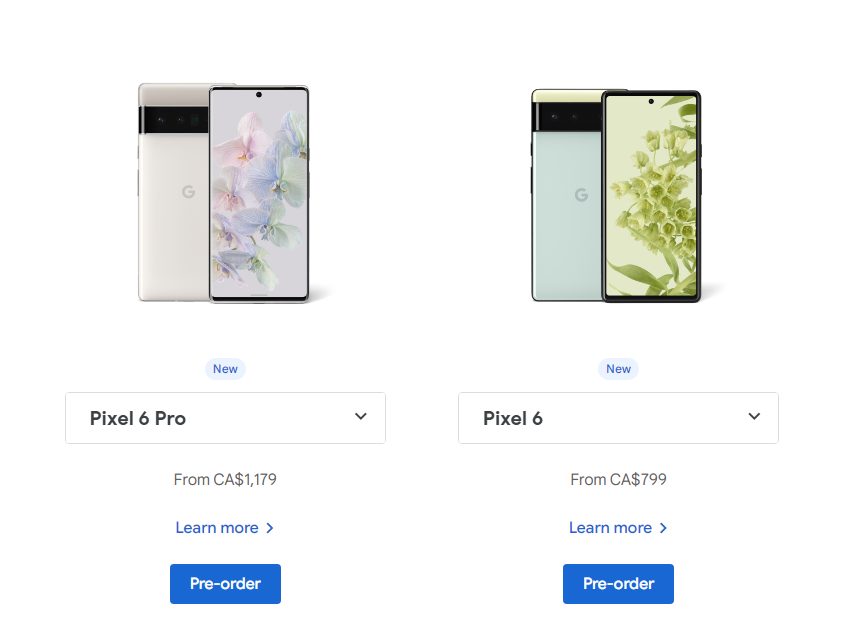 Let’s take a look at some of the most noteworthy differences between the new Google Pixel 6 and its ‘Pro’ sibling:

The Pixel 6 features a flat-edged display, whereas the LTPO AMOLED panel on the Pixel 6 Pro has curved edges. Both phones have HDR 10+ support.

For screen protection, both devices have been upgraded to the considerably tougher Gorilla Glass Victus. In addition to Always-on Display, both new Pixel phones get some new display features like Now Playing, At a glace, and high brightness mode.

For the Pixel 6 lineup, Google went back to the drawing board, and love or hate the linear camera module on the back all you want, the new dual-toned design is fresh and ambitious.

Both the Pixel 6 and its Pro counterpart sport the same new design language, with a glass front, a glass back, and an aluminum chassis.

Both phones feature IP68 water and dust resistance, as well as an additional fingerprint-resistant coating to keep skin oils from smudging the glass body. The Pixel 6 and Pixel 6 Pro share a similar stereo speaker setup, along with an array of three microphones.

The Pixel 6 Pro, on the other hand, is available in Cloudy White, Sorta Sunny, and Stormy Black.

The Pixel 6 and Pixel 6 Pro both pack identical CPU/GPU combos under the hood — Google’s in-house 5nm octa-core Tensor System on a Chip (SoC), with a Mali-G78 MP20 GPU, both at the same clock speeds.

Both devices are also fitted with a Titan M2 security coprocessor, as well as a dedicated security core.

There’s a caveat, though — Google has peculiarly limited the storage options you can get by device colour.

For the Pixel 6, both the Stormy Black and Sorta Seafoam colour options are available with either 128GB or 256GB of internal storage, but you can only get Kinda Coral in a 128GB configuration.

The camera system is really where Google’s higher-end offering is supposed to put the ‘Pro’ in Pixel 6 Pro, as you get a whole extra sensor with the pricier model.

As good as the cameras on Pixel phones are known to be, Google has really pushed itself with this year’s lineup.

The Pixel 6 Pro, however, adds a 48 MP telephoto (periscope) camera with up to 4x optical zoom, Phase Detection Autofocus (PDAF), an ƒ/3.5 aperture, and a 23.5° field of view to its arsenal.

Both phones offer an identical selection of new camera features like Magic Eraser, Motion mode, Real tone, Face Unblur, and Manual white balancing, most of which harness the power of the Tensor chip’s enhanced AI and Machine Learning capabilities.

While Google marketed the Pixel 5 as having an “all-day battery”, the company says the Pixel 6 and Pixel 6 Pro “can last beyond 24 hours” on a single charge.

Both phones support 30W fast charging with USB Power Delivery 3.0, which Google says gets them from 0-50% in 30 minutes, along with 21W fast wireless charging. Reverse charging capability is built into both devices.

Pre-orders for the Pixel 6 and Pixel 6 Pro are already live. Get yours today from the Google Store, Amazon.ca, Best Buy, Rogers, Telus, Glentel, or Freedom Mobile.