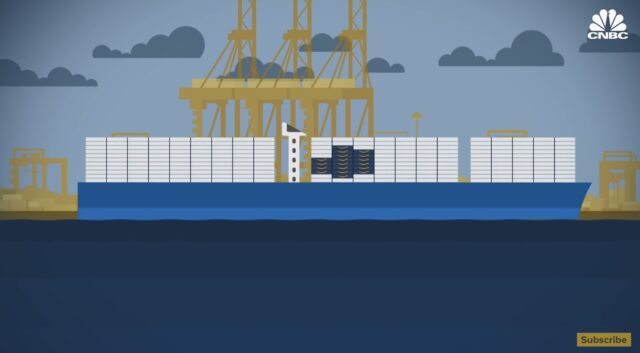 Amazon is using a combination of its own containers, chartered ships and long-haul planes, and meticulous planning to overcome the supply chain issues that have been plaguing retailers ever since COVID-19 hit and have only gotten worse this holiday season — reports CNBC.

Safety regulations and the holiday rush have left massive 14,000-container ships waiting up to 45 days for available dock space at the Los Angeles and Long Beach ports, the biggest in the U.S.

Amazon’s shipments, on the other hand, are being unloaded in as little as two days thanks to the eCommerce giant foreseeing the supply chain chaos and planning for it months in advance.

The pandemic has also resulted in a container shortage, bumping prices for available containers up from less than $2,000 USD pre-pandemic to $20,000 USD today. That won’t be hampering Amazon’s sales this Christmas, however, as the company is making thousands of its own 53-foot cargo containers in China and shipping them to lower-traffic ports like Houston.

Amazon has also started chartering its own private container ships, a practice the company has been experimenting with for Chinese partners since 2017.

For some of its highest margin goods, Amazon is going to the lengths of leasing long-haul planes to fly smaller amounts of cargo from China directly to the U.S., which is both faster than sea shipments and also avoids bottlenecked ports.

Check out the interesting video below:

Amazon’s foresight is paying off big time, and the company is proving why it’s a regular on Gartner’s annual Supply Chain Top 25 list.

Apple is another fixture on that list, but the ongoing global chip shortage is starting to hit the Cupertino, California, based tech giant in tandem with supply chain issues in its biggest markets.

Tapering chip supply has even forced Apple to cut iPhone 13 production targets just a couple of months after launch.

You can click here check out the latest deals from Amazon.ca for the holidays.