According to IDC’s Worldwide Quarterly Mobile Phone Tracker, Apple and Android smartphone vendors shipped a combined 199.5 million units during the first quarter of the calendar year. The company has followed up its report by breaking down the same quarter to smartphone OS market share. 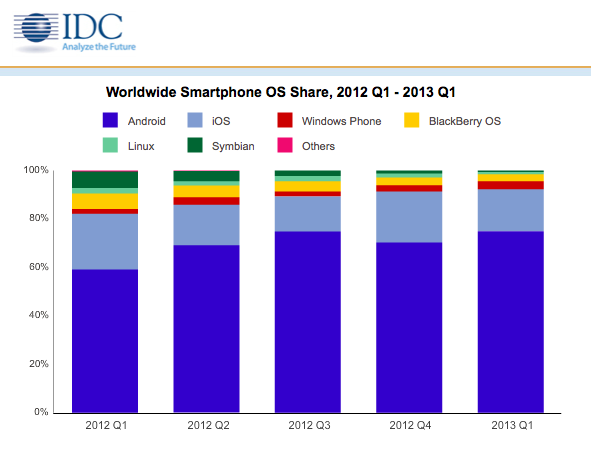 From this perspective, iOS market share dropped 5.7% from 23% to 17.3% on a year-to-year basis, despite record iPhone sales. Android’s share, on the other hand, climbed from 59.1% to 75% of the global smartphone market: 162.1 million devices shipped.

“Underpinning the worldwide smartphone market is the constantly shifting operating system landscape,” noted Ramon Llamas, research manager with IDC’s Mobile Phone team. “Android and iOS accounted for more than the lion’s share of smartphones in the first quarter, but a closer examination of the other platforms reveals turnaround and demand for alternatives. Windows Phone has benefited from Nokia’s participation, and BlackBerry’s new BB10 devices have already hit a million units shipped in its first quarter of availability.”

In an interesting turn of events, Windows Phone surpassed the struggling BlackBerry, retaining 7% of the global market and registering 1.2% growth compared to a year earlier. BlackBerry OS lost 3.5% of its market share and dropped to 2.9%, although during the same period last year the Canadian tech giant retained 6.4% of the global market.