With just over one week to go before Apple’s special event set for September 9, the company has announced iOS 8 adoption has now reached 87% of devices, based on App Store usage ending on August 31, 2015. 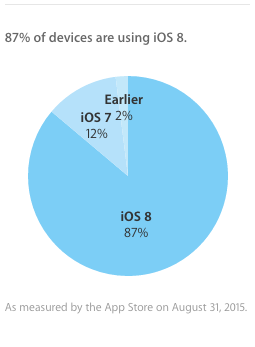 Apple will most likely announce the public release of iOS 9 about a week after its special event, similar to what they did last year for iOS 8.

Once iOS 9 is installed, new features will make it easier to install future updates. Should your iOS device lack space for a future download, iOS 9 will prompt users to delete apps temporarily to make space, then reinstall them afterwards.

Also, iOS 9 will include an option where updates can be automatically installed between 11PM and 6AM when your device is connected to power (after you authorize the install).