For the first time in two years, the iPhone has overtaken Android in the US smartphone market, as the demand for Apple devices spiked with the launch of the iPhone 6 and 6 Plus, Kantar Worldpanel Comtech reported today. 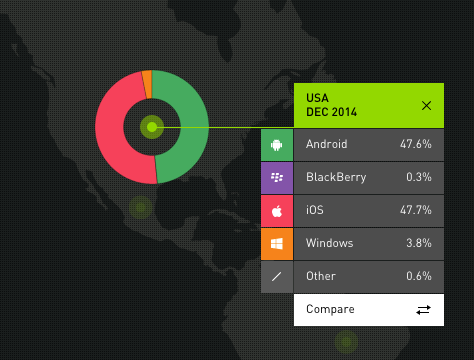 “In the US, Apple iOS overtook Android for the first time since this time in 2012, albeit by the slimmest 0.1% margin,” reported Carolina Milanesi, chief of research at Kantar Worldpanel ComTech. “While the success of the iPhone 6 and 6Plus is unprecedented, this quarter’s performance also points to Apple having its strongest portfolio ever. With a range of devices available at different price points in both contract and pre-pay, Apple was able to take advantage of a weaker Android offering at the premium end of the market.”

As it turns out, the iPhone 6 was the most sought-after smartphone between October 1 and December 31, 2014, the market research firm highlighted. It was also the most popular smartphone given as a gift – once again underlining Flurry’s report of record app downloads and device activations during the week before Christmas.

The iPhone was successful in Europe and Asia as well, says Kantar. For example, Android’s market share dropped by 3.8% during the holiday quarter, while iOS grew 6.2%, with the greatest impact recorded in the UK (up 13.1%).

On Saturday evening there was a Twitter Spaces hosted by Mario Nawfal along with Kim Dotcom, which Elon Musk joined in from using Starlink on his private jet as it took off. The topic was to cover the Twitter Files shared by the social network recently, but Musk also talked about various issues, including advertising […]
Gary Ng
52 mins ago