Sales numbers and global market share definitely favours Android ahead of iOS, and more recently Google Play downloads have surpassed iOS app downloads. But what about in-app or smartphone usage? Forester has the details (via TechCrunch).

As Forrester points out, the Weather app is the most-used application, with 71% of iOS users checking the local weather regularly compared to 65% of Android users. But weather is just one of the existing app categories: practically, iOS users top Android users in all existing app categories. To put it into numbers: social networking — 63% iOS vs. 56% Android; mapping — 60% iOS vs. 52% Android; games — 56% vs. 42%, etc. 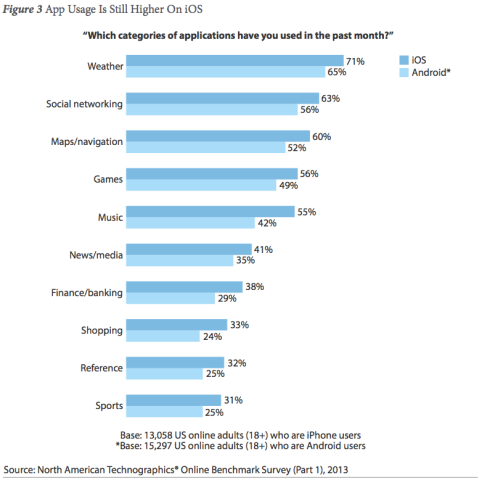 This picture looks no different in Europe: as the Forrester study highlights, browsing the Web is the no. 1 activity on both iOS and Android, but when compared, it turns out that 91% of iPhone users have browse the Internet weekly, while only 80% of Android users do. Messaging also favours iOS: 89% vs. 76%.

In other words, sometimes the wider reach of the Android devices doesn’t quite favour developers, who are looking for user engagement.