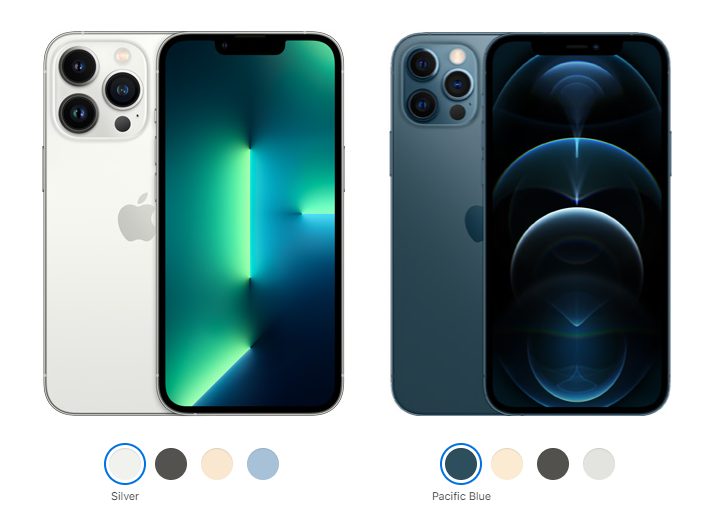 Leading the pack of announcements at the ‘California Streaming’ event yesterday was the next generation of Apple’s flagship smartphone lineup, the iPhone 13. Among the family’s higher-end offerings is the iPhone 13 Pro, which succeeds last year’s iPhone 12 Pro. 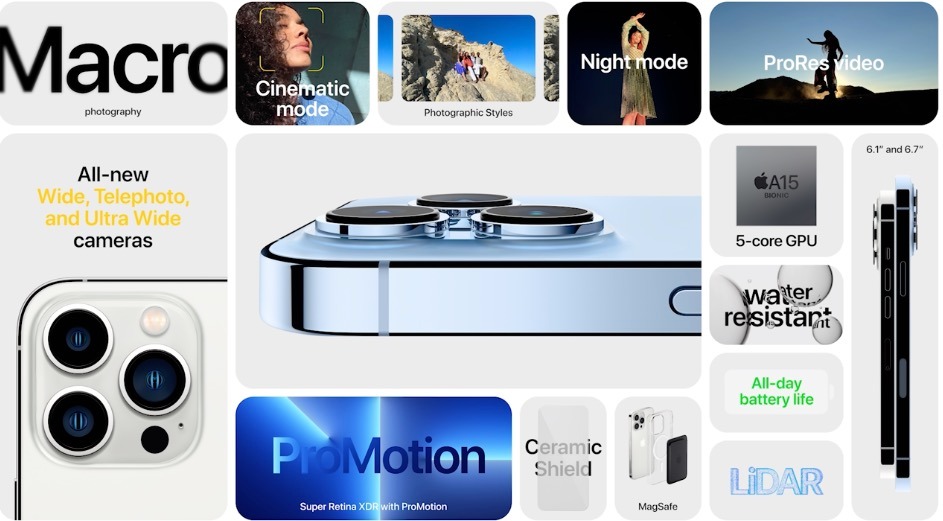 While the iPhone 13 Pro doesn’t look much different than its predecessor (save a barely noticeable smaller notch), the new iteration improves upon a fair bit. Let’s take a look at the differences between the two…

While both the iPhone 12 Pro and 13 Pro share the same 6.1″ OLED Super Retina XDR displays, the 13 Pro also brings ProMotion (adaptive 120 Hz capability) to the table — a feature notably missing from the base iPhone 13 and iPhone 13 mini.

Both the 13 Pro and 12 Pro feature Telephoto, Wide, and Ultra Wide camera setups on the back, complete with premium Apple photography/videography features like Night Mode, Deep Fusion, and Apple ProRAW.

While the camera setups may seem similar, the iPhone 13 Pro does bring an upgrade to sensor-shift Optical Image Stabilization (OIS), as well as 6x optical zoom (from the 12 Pro’s 4x). Digital zoom on the 13 Pro goes up to 15x, and only 10x on the 12 Pro.

The iPhone 13 Pro gets a couple big upgrades in video recording — Cinematic mode for recording videos with shallow depth of field (1080p @ 30 fps), as well as ProRes video recording up to 4K at 30 fps (or 1080p at 30 fps for the 128 GB version) for those versions with 256GB storage and higher.

The Telephoto lens on iPhone 13 Pro brings Macro mode, while all three lenses can now shoot in Portrait mode.

Front snappers on both devices are pretty similar.

The iPhone 13 Pro doesn’t eliminate the dreaded notch Apple’s prime product line has seemingly been cursed with while competitors like Android move to (fairly viable) under-display cameras that provide an authentic full-screen experience.

However, the iPhone 13 Pro does decrease the size of the notch (by roughly 20%), making it smaller and (hopefully) more bearable. Here’s to hoping that next year’s iPhones do away with the notch entirely.

Both the iPhone 13 Pro and its predecessor support Face ID. Touch ID is not supported on either device, unfortunately.

The iPhone 13 Pro features a newer A15 Bionic chip from Apple, which the Cupertino company claims is the “fastest chip ever in a smartphone”. Knowing how powerful Apple’s smartphone CPUs are, that’s not a stretch by any means. The iPhone 12 Pro has last year’s A14 Bionic chip under the hood.

The iPhone 13 Pro comes with a new, 5-core GPU as opposed to its predecessor’s 4-core GPU, along with a new and improved 16-core Neural Engine.

Both phones feature 5G capability, but Apple says more support for 5G is coming to its 2021 models. The iPhone 13 is also said to come with hardware support for satellite communications out of the box, and Apple is expected to add software support for the feature sometime in the next year.

Apple has bumped battery life on the iPhone 13 Pro, with the newer model getting up to 22 hours of video playback versus 17 hours on its predecessor, about 2 hours of improvements.

Both devices have a Ceramic Shield front for added protection, as well as an IP68 certification (at a maximum depth of 6 meters for up to 30 minutes).

The iPhone 13 Pro introduced Dual eSIM support, which is not available on last year’s ‘Pro’ iPhone.

iPhone 13 Pro vs iPhone 12 Pro: Which One Should You Buy?

However, if you’re upgrading from an older iPhone, even if it’s an iPhone 11 Pro, you may want to think long and hard about whether upgrading to the iPhone 13 Pro is a good value proposition.

The iPhone 13 lineup offers marginal upgrades over the last couple of years’ iPhones, so if you have an iPhone 11 Pro or iPhone 12 Pro, you might just be better off waiting another year or two.

Click here to learn more about iPhone 13 Pro on Apple.ca.

Pre-orders start this Friday, September 17 at 5am PDT/8am EDT in Canada, with a launch the following week on September 24.