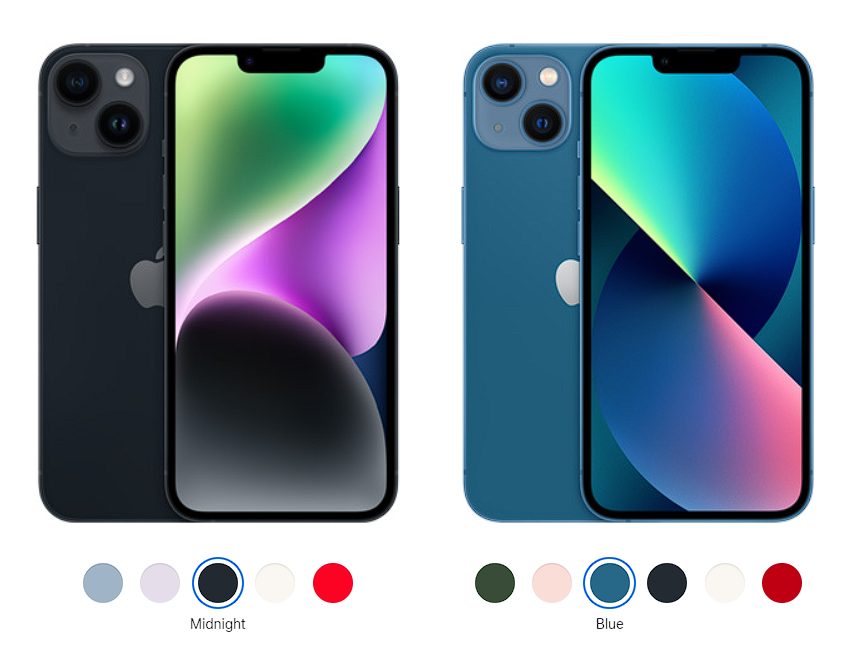 Apple today unveiled the iPhone 14 and iPhone 14 Plus, with the latter spelling the end for the 5.42-inch “mini” model we’ve seen in the past couple of generations.

The new iPhone 14 looks strikingly similar to its predecessor, and they even share a lot of their specs. However, this year’s base model does come with upgrades in a few areas.

The iPhone 14 and iPhone 13 both feature a 12MP dual-camera setup on the rear, with one Wide and one Ultra Wide sensor.

However, Apple said the iPhone 14 has a new 12MP Wide camera with a larger sensor. The iPhone 14’s main camera has a ƒ/1.5 aperture, as compared to ƒ/1.6 on the iPhone 13’s main camera. Both devices come equipped with sensor-shift optical image stabilization (OIS).

On the front, the iPhone 14 has a new TrueDepth Camera that, for the first time, features autofocus. The iPhone 14’s hybrid system offers better pictures in low light conditions.

In addition, the iPhone 14 also brings the new Photonic Engine, which Apple designed to improve low-light photos. According to Apple, the Photogenic Engine offers up to 2.5x richer details and colour compared to the iPhone 13.

For video, the iPhone 14 lineup gets more advanced stabilization in what Apple is calling “Action Mode.” The company said it makes video look “incredibly stable” for smooth recording and even supports Dolby Vision HDR.

Everything else remains the same as far as camera specs go for the iPhone 14 and iPhone 13.

Unfortunately, the iPhone 14 and 14 Plus didn’t get the new pill-shaped Face ID and front camera cutout that the iPhone 14 Pro did. As such, they have a notch that remains just as big (and just as annoying) as on the iPhone 13.

Apple didn’t give its non-Pro iPhone models a generational processor upgrade this year, so the iPhone 14 and 14 Plus stick with the iPhone 13’s A15 Bionic chip. That said, the A15 Bionic powering the iPhone 14 does have one more GPU core (5 vs. 4) than the one in the iPhone 13. Apple still maintains that the A15 is “faster than the competition.”

Battery life also gets a slight bump on the iPhone 14, with the 2022 model getting 20 hours of video playback versus 19 hours on last year’s iPhone 13. The iPhone 14 Plus really takes battery life to the next level, though, managing up to 26 hours of video.

This year’s entry-level iPhones also introduce Emergency SOS via Satellite, which lets users send emergency texts even when there are no cell towers around. The feature launches in November and will be free for two years. In addition, the iPhone 14 supports Apple’s new Crash Detection functionality.

Both iPhone models are water-resistant to a maximum depth of 6 metres for up to 30 minutes. They are rated IP68 under IEC standard 60529.

Both also include MagSafe to support wireless chargers and accessories.

The iPhone 14 and iPhone 13 are encased in extremely similar shells, making them identical in height and width. This year’s model is only slightly thicker, with a depth of 7.80mm as compared to 7.65mm on the iPhone 13.

If you have an iPhone 13, upgrading to the iPhone 14 doesn’t make much sense unless you want a bigger screen and don’t want to break the bank for a Pro Max. The performance uplift is marginal, even compared to the iPhone 12. Essentially, you’re going to have to decide if the improved cameras and new Photonic Engine are compelling enough to take the plunge.

If you’re upgrading from an iPhone 11 or older, you might be faced with an even harder choice with last year’s models getting a price cut to $849 for the iPhone 13 mini and $999 for the iPhone 13. You could get an extremely similar product experience to the iPhone 14 for $100 less (or even $250 if a smaller screen is more your style).

Of course, if you’re looking for a larger screen, the $1,249 iPhone 14 Plus is the way to go. It will get you the screen (minus the “ProMotion” 120Hz refresh rate) and most of the performance of last year’s iPhone 13 Pro Max without breaking the bank.

Click here to learn more about iPhone 14 and iPhone 14 Plus on Apple.ca. Pre-orders begin this Friday, September 9, at 5am PT in Canada.

The iPhone 14 officially launches on September 16, while the iPhone 14 Plus won’t launch until October 7.