Although the buzz is now around the iPhone 5s and 5c, and how they stand up compared to the competition, Apple’s older models beat the Samsung Galaxy S4 when it comes to how fast the screen responds to touches. And not to mention the year-old model, the iPhone 5, which is 2 times faster than any other Android device available on the market. 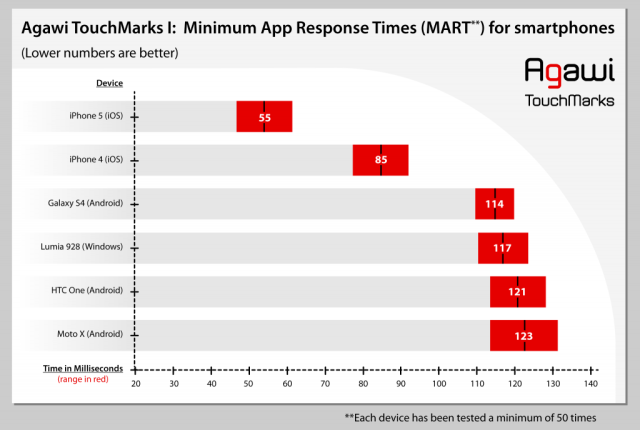 The findings come from a game and app streaming company, Agawi (via Venture Beat), which has started doing TouchMark benchmarks — measuring the touchscreen latency and giving MART (minimum app response time) scores — as part of their work in delivering Flash-based Facebook games and other apps for iOS games.

While the tech specs don’t mention touchscreen responsiveness, this is equally important as display quality, because it affects the user experience.

“Even a two-year old iPhone 4 beat out the other Android devices,” Peter Relan, chairman of Agawi said. “You expect this from Apple’s design team, while others may view their responsiveness as good enough. Now we know why the Android touch keyboard is not as snappy.”

Agawi’s first TouchMark benchmark test has found that the iPhone 5 responded to touches at 55 milliseconds on average, which is very fast, while the closest to this speed was the iPhone 4 at 85 milliseconds. The company has also put the Google Moto X, HTC One, Nokia Lumia 928, and Samsung’s latest flagship model to the test. The latter fell far behind at 114 milliseconds response time, but the Nokia was even slower at 117 milliseconds.

Stay tuned for the iPhone 5s and 5c tests!