iPhone 5c pricing has failed to impress many market analysts, and IHS has joined the line (via Digitimes). The market research company believes the lower-cost iPhone won’t add significant shipments to Apple, since its $549 price (unlocked) keeps at the same price point as the current mid-range model, the iPhone 4S.

“At an unsubsidized cost of US$549, the iPhone 5c remains at the same price point as the existing mid-range model in Apple’s smartphone line, the iPhone 4S,” said Francis Sideco, director for consumer electronics and communications technologies at IHS. “In light of this pricing, the 5c appears to be a midrange product that cannot significantly expand the available market for the iPhone line to lower-income buyers. As a result, the arrival of the 5c will not spur a major increase in iPhone sales in the second half of 2013 compared to previous expectations.”

After the product launch, IHS has decided not to upgrade its forecast for overall iPhone shipments in the second half of this year, an estimate that currently stands at 86.1 million units, up 25% from the first half of the year.

From their perspective, the best pricing would have been between $350 and $400, unsubsidized. Apple, however, opted to offer the handset for $99 on contract. As a result, IHS says the 5c won’t spur sales, because “it does not materially expand Apple’s addressable market past the level we had already taken into account.”

In fact, Apple’s shares are down a day after the special event, as big financial companies such as JPMorgan Chase, Credit Suisse, Bank of America, and UBS say the iPhone 5c is not the lower-cost iPhone they expected. 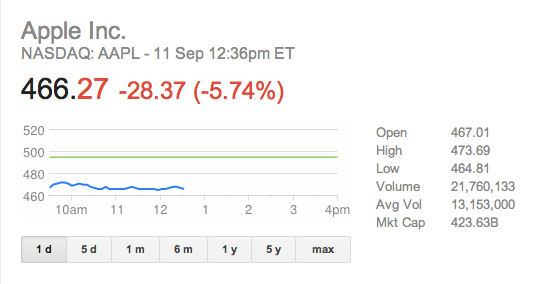 What about you? Is the iPhone 5c what you expected to see?