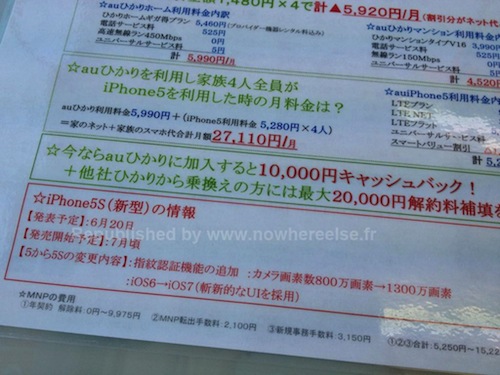 After Tim Cook cooled down June iPhone 5S launch rumours with a “killer” sentence a document obtained by the French site Nowhereelse.fr suggests that the iPhone 5S will be presented in June followed by a July release.

The document is reportedly intended for employees of Japanese wireless carrier KDDI and, as you can see from the above image, the iPhone 5S is clearly visible in red. What’s interesting, though, is that the document allegedly puts iPhone 5S pre-orders to June 20 with the highly anticipated handset to reach the stores in July.

If we can believe this rumour, the highly anticipated handset will feature a 13 MP rear camera, a fingerprint sensor, and will have iOS 7 pre-installed.

Considering that earlier analyst consensus was for a June release, the KDDI internal document leak seems to confirm analysts’ talk. Also WWDC 2013 is scheduled for June 10–14, so we can expect a surprise from Apple. But if we are to believe Tim Cook, the iPhone 5S won’t be available until this fall.